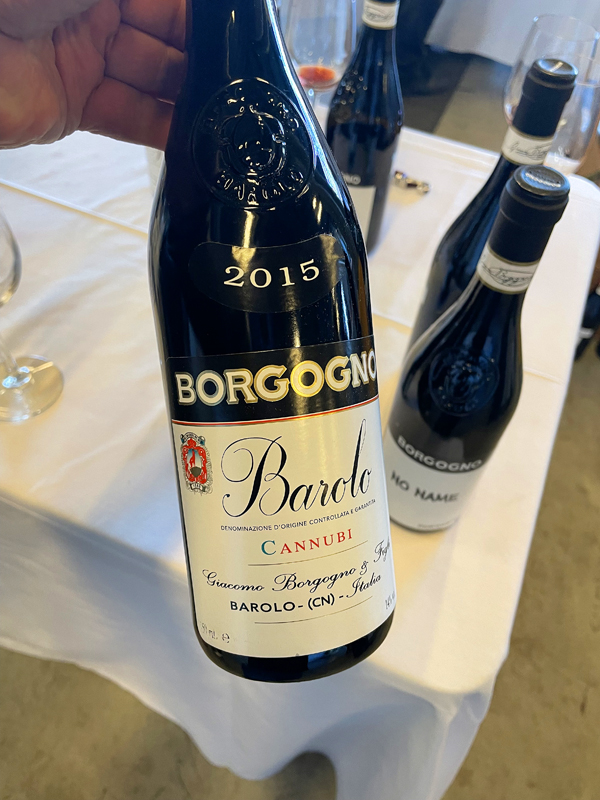 2015 Giacomo Borgogno & Figli, Barolo DOCG, Cannubi, Piedmonte, Italy.
When I tasted the 2015 Borgogno Cannubi, I felt a sense inner peace and the presence of classic Nebbiolo purity, it excited my palate with layers of opulent density, showing macerated cherry, damson plum, strawberry and mulberry fruits that were admirably seamless on the full bodied palate, these flavors were joined by earth cedar, anise, mineral tones, distilled ros petals and a light truffle note. I should mention that there was a welcome tame feeling of tannins, rather than the usual youthful harshness and I think the 2015, which is more overt in fruit, seductive and or hedonistic is less fierce in grip than I expected and I believe it will appeal throughout its drinking window, which will be considerable, measured in decades. Maybe the warm of the year and transparent winemaking have benefited this gorgeous wine, I loved every sip of this Cannubi and the length is fabulous, making for a glorious Nebbiolo experience. I hope to re-visit this one in 10 years, I was lucky enough to try a Borgogno 2006 not too long ago and that was amazing, these are exceptional wines. Founded in 1761, Borgogno is the oldest continuously operating winery in Barolo, is now run by Farinetti family, who bought the estate in 2008. As noted in my prior reviews and as the winery explains, this historic property under Andrea Farinetti’s leadership, has seen an organic conversion and the winery reverted to using only cement vats for fermentation, and a return to the original or the estate’s original winemaking style. All the wines are made at the estate’s winemaking facility in the village of Barolo in their underground network of historic fermentation and aging rooms. Another bonus for Nebbiolo lovers, Borgogno has one of the deepest wine libraries in the world, with Barolo vintages stretching back decades. This brickish dark ruby/garnet 2015 gains from air and gets seductively aromatically in the glass, it is a wine that deserves to be a center of attention with a hearty meal.

The Borgogno Cannubi cru Barolo, like all of their single vineyard and riserva wines, was hand crafted with traditional methods, made only from the best grapes from Cannubi and fermented with native yeasts and sees a gentle extraction to allow for delicacy, while building age worthy structure. This spontaneous natural fermentation takes place in cement tanks at low temperatures and is followed by a long submerged cap maceration, which the winery says, can in some vintages like this one, reach 50 days before being raked off to mainly large oak casks. The Cannubi site is set on calcareous soils, with clay marl, and is slightly sandy, with Borgogno’s patch being perfectly situated to capture the sun, this terroir delivers power, chalky stoniness and ripe flavors. The aging for the Barolo Riserva happens exclusively in big Slavonian oak barrels for a massive six years, then this wine, like all Borgogno’s Riservas, was rested almost a year in bottle before being released from the cellar, while the Cannubi, as the winery says, gets 4 years in Slavonian oak casks (4500L) with a further 6 months in bottle before release. Cannubi is maybe the most famous and renowned (Grand) Cru of Barolo with a long history, that dates back to the 1700s, the Nebbiolo here is legendary and it is always a special treat to drink wines from this prestigious Piedmonte vineyard. Even though the year was marked by an extended period of heat, Borgogno’s vines weren’t overly stressed and even they had to pick early, they highly rate this vintage, which I cannot disagree with, as much as I enjoyed their effort here. This outstanding 2015, is quite expressive for a young Borgogno and it opens luxuriously, maybe this is baby fat and it performs as well as the nose and first impressions promised. In the past, I remarked that these wines had a hardness or an austere personality, but now I am thrilled by these wines, especially this one and can’t wait to try the upcoming Cru Vineyard 2016 releases, especially their Cannubi Barolo, which has wonderfully over delivered in the difficult 2014 and the warm 2015 vintages!
($150 to $195 Est.) 95 Points, grapelive