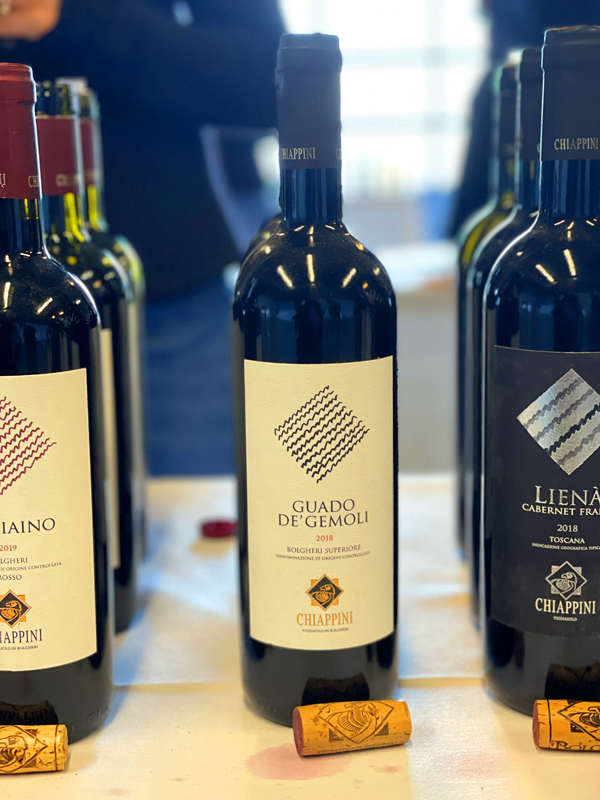 2018 Chiappini, Guado De’ Gemoli, Bolgheri Superiore DOC, Tuscany, Italy.
There’s a lot to love with the Chiappini wines, and it was great to taste through them at this year’s Slow Wine tasting, especially good was their latest Guide De’ Gemoli Bolgheri Superior, which shows gorgeous depth and graceful mouth feel with this 2018 vintage showing blackberry, plum, cherry and mulberry fruits along with polished French oak shadings, as well as anise, tobacco, sandalwood and creme de cassis. This is Chiappini’s signature wine, modeled after their famous neighbor at Ornellaia, is classic Bordeaux blend featuring mainly Cabernet Sauvignon 70%, Merlot 15% and Cabernet franc 15% coming from their Bolgheri estate vines, including the Le Grottine Vineyard, which was planted back in 1978 along with Felciaino, that got planted in 1986, both set on the region’s alluvial and clay like soils with a concentration of calcareous deposits, which along with the Tuscan Coast climate makes for outstanding fruit density, flavor richness, elegant tannic structure and complexity. This vintage is exceptional and the Cab Franc has some nice exotic spice and violets, while the Merlot adds roundness and fills the gaps, backing up the dominate and powerful Cabernet Sauvignon perfectly, making for a wine that impresses the senses with a full body and a divine lingering dark fruited finish that has a touch of smoky vanilla and racy cinnamon accents. The Guado De’ Gemoli has long been a favorite of mine and this release is delicious, and the other one I usually go for is the Ferruggini, a blend of Sangiovese 50%, Cabernet Sauvignon 30% and Syrah 20%, which is a great value and maybe a touch juicier in style, though I must also mention the single cru Felciaino, which is a site blended red of Cabernet Sauvignon 50%, Merlot 40% and the rest a small dose of Sangiovese, it is in some years the best wine.

The wine making at Chiappini is a study in not doing too much, but giving the customer everything they expect with natural fermentation in steel tanks and a cool maceration period to extract color, flavor intensity and a tannic backbone. The maturation or elevage for the Guado De’ Gemoli lasts at least 18 months in classic French oak barrels, with just 15% being brand new and the rest seeing second or third use wood that tone down the sweet, smoky toast to an acceptable and well judged amount. The wines at Chiappini try to capture the essence of place and are an artful and soulful expression of the Bolgheri region that give a warmth of character that I find distinctive, it is shared by the legendary estates here, like the mentioned Ornellaia, as well as Tenuta San Guido (Sassicaia) and Le Machiole, to name a few. This is the region of Super Tuscans, with Cabernet Sauvignon being the star, but in recent times the wines with Cabernet Franc leading the way are being standouts, and of course the Merlot here has a cult following, as witnessed in the Masseto and Messorio bottlings by Ornellaia and Le Machiole respectively. Chiappini also does a line of single varietal wines as as the Bordeaux and hybrid Tuscan blends, this line known as Liena, includes a stunning Cab Franc, that I recently reviewed here at grape live.com, as well as a pure Cabernet Sauvignon, a Merlot, and a unique 100% Petit Verdot, which I am very much looking forward to trying. The Chiappini family is led by their patriarch Giovanni, who represents the beating heart of the estate and who has put his heart and soul into the dirt here, this place is a mirror of his hard work, and his son Alessandro makes the wines. I know his daughter Martina, the sales director for Chiappini, through her trips here to California and it was great to see her at Slow Wine, where she wowed this year’s gathering with these wines, and as mentioned, especially this Guado De’ Gemoli, which is awesome, it compares well with wines twice or three times the price.
($65 Est.) 94 Points, grapelive