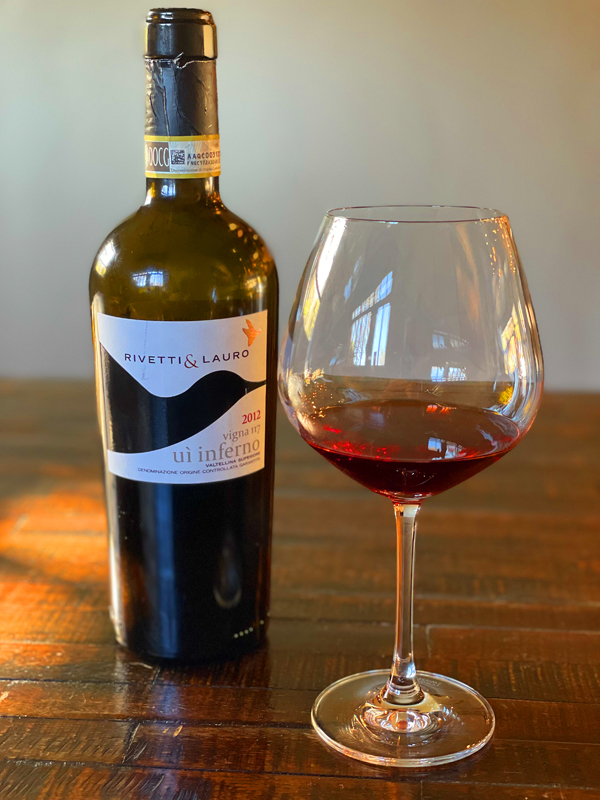 2012 Rivetti & Lauro, Valtellina Superiore DOCG, Uì Inferno – Vigna 117, Lombardy, Italy.
This gorgeous and fully mature 2012 Uì Inferno – Vigna 117 Valtellinna Superiore by Rivetti & Lauro comes from terraced vines in this alpine region in upper Lombary and is made from Chiavennasca, the local name for Nebbiolo, it is a wonderfully open wine with outstanding purity, silken well integrated tannin(s) and opulent red berry fruit, with black cherry, earthy currant, wild plum and balsamic strawberries leading the way, along with hints of herbs, spice, black licorice, tobacco leaf and sandalwood. As this Rivetti & Lauro, with its classic amber/brick edged dark ruby color, opens on the medium bodied palate pretty dried flowers and sultry kirsch liqueur come through and the natural acidity becomes more and more refined, making for a seamless Nebbiolo experience, and this wine would be exceptionally good with simple meat dishes, as well as a welcome partner with seared duck breast with a red berry reduction or woody mushroom risotto. This example of Valtellina drinks with an aged grace and sophisticated elegance that is usually reserved for elite Barbaresco wines or even a Premier Cru Burgundy with a compelling textural quality and this Valtellina is an extraordinary value too. This was my first ever taste of Rivetti & Lauro and I hope to try more from this producer, especially their Grumello and Sassela crus, which are highly regarded and coveted bottles. The 2012 Uì Inferno, a steep sun soaked site, Vigna 117, a single terraced parcel, is made from 100% Nebbiolo and comes in at about 14% natural alcohol, it highlights the ripe flavor intensity of the vintage and lush mouth feel, as well as its lingering, long and divine finish, this is a very pleasing wine and reminds me why I love this region. I will add Rivetti & Lauro to my watch list along with another new favorite, Tenuta Scerscé, as well as long time favorites Nino Negri, Nobili, Alfio Mozzi, Conti Sertoli Salis and in particular Ar. Pe Pe (Arpepe), which are a bit easier to find here in the states.

Valtellina is a high Alpine valley in the Lombardy region of northern Italy, bordering Switzerland and renown for its mountain Nebbiolo wines, which have really gained worldwide attention in recent times, even though this area has flourished since Roman times. During the 16th, 17th and 18th centuries, the Valtellina region belonged to what was know as the Three Leagues (the “Grey Leagues”), which was then a mutual-defense zone that was independent of Switzerland, but was part the easternmost Swiss Canton of Graubünden. This remote area in which German, Romansh, Lombard and Italian languages are all spoken, the region became known variously as Veltlin, or Westtirol (West Tyrol) in the 1800s, but now proudly Italian. Interestingly, because of Valtellina’s remote location and easy to defend terrain, during the last months of World War II, the Italian dictator Benito Mussolini and other diehard fascist leaders of the Italian Social Republic (RSI) proposed making a “last stand” against the advancing Allied forces in the Valtellina, but their plans never got a chance to came into being and the area became much more well known for its wine culture. As noted, In Valtellina, the wines are mostly made from Chiavennasca (the local name of Nebbiolo), along with some percentage other local varieties such as Rossola Nera of which is permitted up to 20% in the DOC and just 10% for the DOCG bottlings like this one. Grapes, by local rules must be small yields for the utmost quality and the finished wines have to be aged for at least 24 months prior to their release or three 3 years if labeled a Riserva bottling, also they need to be at least 11% natural alcohol. The yields for the DOCG wines are restricted as well to promote concentration, with requirements of a minimum alcohol level for the DOCG wine at 12%. The Cru Villages for red wines in Valtellina are Grumello, Sassella, Inferno, where this Rivetti & Lauro comes from, Valgella, and Maroggia. The village names, as in Burgundy are normally indicated on the labels, plus Valtellina also has an Amarone style DOCG Nebbiolo wine called Sforzato, where the grapes see a period of drying on straw mats to give hedonistic density and richness of flavors. If you’d not discovered Valtellina, above Milan and the lake district, yet, it is a great time to get started.
($30 Est.) 92 Points, grapelive