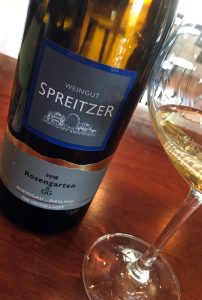 2016 Weingut Spreitzer, Riesling Trocken, Osetricher Rosengarten, Grosses Gewächs, Rheingau Germany.
The Spreitzer cru Rosengarten, the unique prime cut ‘filet piece’ of the Lenchen, is a tiny clos parcel (rose garden), on lower elevation between the Rhein River and the Spreitzer’s home, (is) set on mostly loess-loam soils with red, iron-rich stones as well as a very minimal mix of slate and quartzite. This parcel is typically wonderfully expressive and full of ripe orchard fruits and open density (full bodied) with textural charm. Lucky enough I was able to check in on this 2016 while still in the vineyard, just before the harvest crews picked these amazingly beautiful grapes of these old vines, as well as most of Spreitzer’s vineyard blocks, it what was a fantastic evening experience with Andreas and his Land Rover! The Rosengarten site is warm and near the widest part of the Rhein River, creating an almost lake effect making it an early ripening parcel and the wines always show well even in their youth, as does this 2016 GG, it’s got the potential and stuffing to compete with the 2012 and even the 2015, which is still one of Spreitzer’s greatest ever wines, in my opinion, so that is also telling about just how great this vintage is! For the Grand Cru (GG’s) the Spreitzer brothers Andreas and Bernd use sponti (natural yeasts) and old stuckfass (large German oak ovals)in their ancient cellar along with employing a long fermentation, and extended lees aging to protect the juice from oxidation, they whole cluster press and then allow the must to clarify with gravity for about 24 hours, the Rieslings sit on their gross lees to gain a beautiful vinous character and they are filtered gently only once after being raised in the cask. The wines are very hedonistic and layered, expressing their true terroir and upper Rheingau personalities, in contrast to Rudesheimer Berg’s laser sharp and slate intensity, though no less serious are profound, especially in this case. This 2016 Rosengarten GG is amazingly open and wildly seductive with a rich/fruity and floral palate with incredible density and dry extract that rivals a Corton-Charlemagne! Beautiful yellow fruits, spicy liquid rock and a heightened perfume of distilled rose petals lead the way in this gorgeous golden hued and exotic dry Riesling by Spreitzer, this is without question a hyper GG, it’s really wine porn in the glass, that explodes with flavor and textural pleasure adding complexity with every sip with peach, apricot, key lime, golden fig, cool melon and tangy citrus fruits as well as leesy notes plus wet stone, mineral, a hint of honey and verbena/citron. This not shy, sexy and fleshy Riesling reminds me a bit of the von Winning Grand Crus with it’s Burgundy like depth and body, it’s a brilliant effort that is almost as concentrated as the powerhouse 2015’s from Weingut Spreitzer and should prove an exciting drinking experience for decades to come, this is a knockout Grosses Gewachs!
($45 Est.) 94+ Points, grapelive