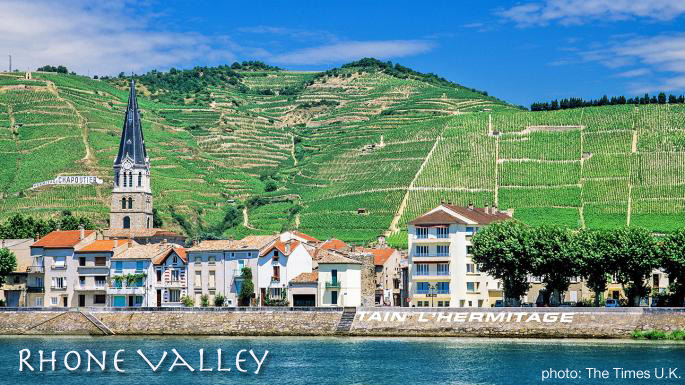 France’s Rhone Valley is one of the most historic and majestic wines regions on earth, it’s location near the beautiful azure Mediterranean and the Rhone-Alps make it a diverse growing region and it’s varied soils make for an incredible palate of cool and warm flavors, it’s home to some of the world’s most sought after wines from Hermitage to Chateauneuf du Pape. While the Rhone does great whites and dry Rosé, it is most famous for the reds which make up about 80 percent of the total production with two main varietals leading the way here, the most widely planted being Grenache Noir in mainly the Southern parts, while Syrah makes up a good percentage too, and is the major grape of the Northern sites such as Hermitage, Cote-Rotie (where it can be blended with Viognier), Saint-Joseph, Crozes-Hermitage and Cornas. Here in California, Rhone varietals thieve in our warm climate and there are many fantastic examples, one of the reasons these grapes are enjoyed around the world is there openess and dense richness, they are less tannic mostly and less severe that the Bordeaux varietals and more opulent and darker than Burgundy, as well as usually being far less expensive, especially Cotes du Rhone(s) which are down right bargains, though even the higher level cru wines tend to cost way less than Cabernet or Pinot, for the money they can be some of the best wines in California too. For a complete history of Rhone(s) in California, you should read the fantastic book by Patrick J. Comisky “American Rhone, How Maverick Winemakers Changed the Way Americans Drink” University of California Press 2016, it’s a quick and fun page turner that digs deep into the minds that turned Rhone style wines in California into some of the most loved and sought after wines in the country, following the birth of the Rhone Rangers to the new generation and talks about each of grapes themselves in great detail and how they got here.

Grenache is the main grape of the South found in the famous Cotes du Rhone (villages), Chateauneuf du Pape (France’s very first AOC, founded in 1929), Gigondas, Vacqueyras, Sablet, Cotes de Ventoux, Costeries de Nimes, Carianne, Lirac and Rasteau to names a few, it usually makes up about 70% of the blend with Syrah and Mourvedre being it’s most common partners in crime in these wines. Grenache Noir, which is a sibling to Grenache Blanc and Grenache Gris is thought to have originated in Spain, though I understand that Sardinia is now claiming as their own as some ancient residue found in recent escalations seems to predate what has been found in Spain, but nothing is yet concrete, it’s just fascinating history. The grape became France’s most widely planted varietal post Phylloxera era, most believe that time frame is when cuttings from less hit Spain came into the Rhone, where it took over from ancient grapes that were less flavorful and more fickle to grow, as Grenache is a hardier vine and develops high sugars and dark color with less rough tannin when compared to Mourvedre and Syrah, making for a full bodied and hedonistic wine. It’s more fruit forward nature give it an ease of use that is hard to resist and it’s light earthy/spicy character provides a bit of contrast and complexity, especially when you add small amounts of Syrah, Mourvedre, Cinsault, Counoise and even a touch of the white Clairette to it, as you’ll find in some Chateauneuf du Pape examples, which can have up to 19 different grapes! The South has a more true Mediterranean feel and richness of palate with softer tannins mostly, thanks to that Grenache based joy, they also show a fine chalkiness, with the influence of the clay and limestone soils, these wines pick up that intriguing garrigue (a lavender like quality) and are mouth coating with plum, raspberry, cherry and strawberry leading the way along with touches of pepper and leather. Grenache has proven itself here in California with many fine versions gracing the state these days joining long time legend Randall Grahm of Bonny Doon Vineyard who’s iconic Cigare Volant and Clos die Gilroy continue to be some of the best examples along with newer wineries like Sine Qua Non (by Manfred Krankl, the most sought after and some the most expensive Rhone stuff in California), Tribute to Grace, Saxon, Epoch, Sheldon Wines, Stolpman Vineyards, Mathis and rising local (Monterey) star Ian Brand, who’s La Marea old vine stuff absolutely rocks.

Syrah, while being a strong part of the Southern Rhone wines, is the exclusive red grape of the Northern Rhone and is the only legal one in the main areas there, though you can find Gamay in the real upper end as well. Syrah in the Northern crus is more acidic and leaner with pretty details that are accented by the unique granite and schist soils and cooler climates, though this wines can also be monumental and full bodied powerhouses such as Chave and Chapoutier Hermitage Rouge(s) and certainly Guigal’s famed Cote-Roties. Then there are the three step-sisters, Crozes-Hermitage, an era known for an earthy/meaty style rustic Syrah, while Saint-Joseph is the more delicate and pretty site, while last but not least Cornas is the most nervy, usually made with 100% whole cluster and stem inclusion, they are the wine geeks holy grail these days. Syrah in California has a longer history than Grenache, though the very first single varietally label Syrah came in in 1974, made by Walter Schug at Joseph Phelps Vineyards, a wine I am lucky enough to have had once, later gaining fame in the nineties with John Alban making some of the best ever versions from vine cuttings that came from his friends in Cote-Rotie. Alban Vineyards have set new standards for this grape from their tiny estate in Edna Valley, his style is richer and denser than the French cousins, though there’s a new wave of Syrah in California which is more true to the cooler Northern Rhone, these modern takes are exceptional with the likes of Drew, Pax, Peay Vineyards, Lagier-Merideth, Piedrasassi, Stolpman and Radio-Coteau, as well as the local (Monterey) Joyce Vineyards Tondre Grapefield, to name a few are ones to search out. In the bigger style look for L’Aventure, Booker, Terry Hoage, Andrew Murray, Denner, Big Basin Vineyards and the local big boy Parsonage Village Vineyard in Carmel Valley.

In the Rhone Valley, Rosé is booming, as it is everywhere and while not as famous as Provence, it is a great spot to get a dry and interesting pink wine, especially those that come from the Rhone’s only Rosé only area, Tavel, an AOC near Nimes and Lirac. Other places to look for great Rosé are Gigondas, which only recently allowed Rosé into the AOC (legal Appellation Control) and the Luberon including the Venoux with it’s dusty chalky soils on the slopes of Mount Ventoux. Usually Grenache heavy and darker/fuller than Bandol, Rhone pinks look for vivid in the glass and have a fruitier profile in most cases, but can also be brilliantly pale, crisp and mineral focused

While most people know the dreamy perfumed Viognier and it’s spiritual home of Condrieu in the Northern Rhone Valley, not many have fully discovered the likes of Marsanne, Roussanne, Clairette, Ugni Blanc, Rolle (Vermentino) and or Grenache Blanc that make up most in part the Rhone whites, which are named less by grape than by village. These wines are a tiny part of the Rhone production, but they can be utterly mind blowing, especially Hermitage Blanc (Roussanne/Marsanne blends), Condrieu (100% Viognier) and Chateauneuf du Pape Blanc a blend of almost any except Marsanne and Viognier, which are not allowed! Mostly Grenache Blanc, Roussanne and Clairette with a few others including Pic Poul). In California, it’s hard to beat Alban Vineyards for Viognier and Roussanne, and while know for his red Cigare Volant, Randall Grahm’s Bonny Doon Vineyard Le Cigare Blanc is a gorgeous Chateauneuf style white featuring Grenache Blanc in the blend.