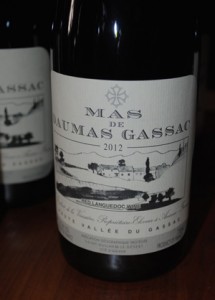 2012 Mas de Daumas Gassac, Rouge, Haute Vallee du Gassac, Vin de Pays de L’ Herault, Languedoc, France.
Samuel Guibert’s Mas de Daumas Gassac Rouge and Blanc continue to get better and better, with in my opinion the 2012 reaching new heights for the red Grand Vin. it is showing a verve and freshness that never really emerged as much in prior vintages, this is not a criticism of the early wines many of which were masterpieces, it is just to highlight the evolution of the wines and celebrate a lift in energy in them. The 2012 Rouge Mas de Daumas Gassac is a field blend of 75.6% de Cabernet Sauvignon, 5.5% Merlot, 4.4% Tannat, 3.9% Cabernet Franc, 1.8% Malbec, 1.8% Pinot noir, 7% other grape varieties grown on sloping vineyards sites that have iron rich soils, it is fermented in stainless and was aged about a year in mostly neutral French oak. The Cabernet leads the way, though the terroir influence is serious and gives this Grand Cru du Languedoc it’s unique character, it bursts from the glass, almost black at it’s core and a bright garnet hue with a bouquet of dried flowers and juicy blackberry, spice, graphite and anise that leads to a clear and persistent palate of tangy black currants, boysenberry, dusty plum and kirsch/cherry along with sweet herbs, sage, tobacco leaf, minty/licorice, light earthy notes, dark coco powder and cedar spice. This feels almost full bodied and mildly tannic, but is wonderfully textured with fine poise and length, this might be a vintage to drink in it’s youth? Drink the 2012 Mas de Daumas Rouge over the next 3 to 5 years, though a few bottles left in the cellar might be rewarded after a decade, time will tell, but it certainly pleases with vibrancy and stylish charms in the here and now!
($48 Est.) 92+ Points, grapelive