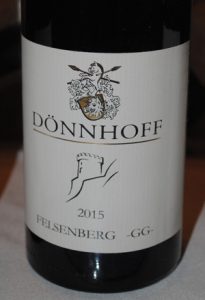 2015 Weingut Donnhoff, Riesling Trocken, Felsenberg, Grosses Gewachs, Nahe Germany.
The spicy intense Felsenberg Grand Cru dry Riesling from Donnhoff is simply out of this world, it is very different and unique the same way Bonnes Mares is to the Grand Crus of the Cote de Nuits, you know it’s special when you experience it, but it still emotionally involves you in the same way the other Crus do. When you think of Donnhoff, the Hermannshole would be La Tache or Romanee-Conti, while Felsenberg would be Bonnes Mares… or like comparing Le Montrachet (Hermannshole) and Corton-Charlemagne (Felsenberg) though I like the Bonnes Mares comparison better in poetic terms rather than in red v. white terms… As for 2015, it is an awesome vintage for Donnhoff (and Germany) and this dry Riesling is one of the best! Brilliant in a way you’d expect from such a producer, yet so nuanced and transparent, I used to be slate obsessed when it came to Riesling, so finding this volcanic or porphyry soil driven wine so magical is sometimes a surprise, giving the Felsenberg a spicy afterburner with salt and pepper kick and raw mineral character. The 2015 Felsenberg GG starts with crystalized ginger, lime blossom and remarkably a kind of dark flower essence and tangy stone fruit with a belt of brisk citrus before a full and driving palate of vibrant tangerine, flinty wet stones, sea breezes (saline) and zesty apricot in a dense and powerful form with racy, but elegant acidity, this wine shines bright with finesse and poised delicacy even in it’s youth, it’s glorious and while it’s second to the Hermannshole GG in opinion that margin is very narrow and this fantastic Riesling might tighten that gap in the years to come! This vigorous white shines a light golden hue in the glass and has layers of texture and depth, hedonistic in many ways, but still shy and blooding in others, it sneaks up on you like a leopard stalking it’s prey. Without question, in terms of the quality and focus these 2015’s from Donnhoff rival any wines, white, red and other from anyone or anywhere, especially these GG’s and dry wines, but it must be said, I loved the Kabinett, Spatlese and the amazing Auslese almost as much, don’t plan to miss any of Cornelius Donnhoff’s masterpieces in this vintage. The Felsenberg GG has at least 15 to 20 years of pure heavenly drinking ahead of it, best though I would think between 2020 and 2030, but seriously, I’d be hard pressed not to open a few as soon as I could, what a great and stylish wine from one of Germany’s best estates. Lingering peach, white cherry, basil, fleshy tropical fruit and exotic Asian spice sweep your mind away in this vital Riesling, sadly I missed Donnhoff on my recent stay in Germany, a mistake that haunts me when I relive my tasting notes from this collection of 2015 beauties I tasted with Anne Donnhoff this summer at Terry Theise’s San Francisco Germany portfolio tasting.
($65 Est.) 94-96 Points, grapelive