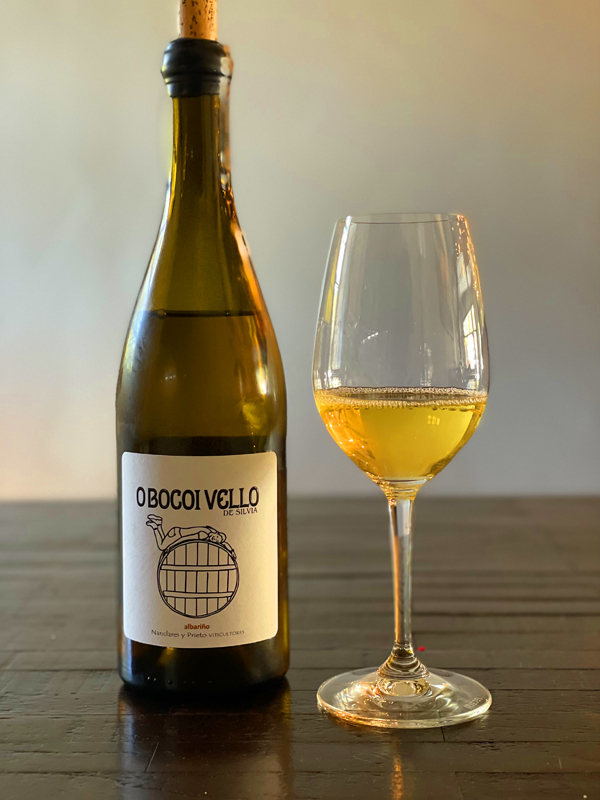 2019 Nanclares y Prieto Viticultores, Albariño, O Bocoi Vello de Silvia, Rias Baixas DO, Galicia, Spain.
These Nanclares y Prieto wines are some of my absolute favorites from Galicia and especially their awesome Albariño bottlings, but I had never tried this O Bocoi Vello de Silvia version, so I was thrilled to get my hands on a bottle of this 2019 vintage which is a stunning and soulful wine with a salty freshness and lovely depth. The O Bocoi Vello de Silvia evokes a foggy or misty morning beach walk with aromatics that offer marine briny elements and that salty character to go with delicate florals before revealing a lighter framed palate of white peach, crisp green apple, tangy citrus and melon fruits as well as wet stones, snappy herbs, verbena notes and an almond like bitter element. This ultra dry and austere special cuvée from Alberto Nanclares and Silvia Prieto saw a bit of skin contact, adding some phenolic grip (extract) to this serious white. All of the Albariño offerings from Nanclares y Prieto are sourced from organic vines in the famous Rias Baixas region, grown almost at sea level, in Spain’s cool western Atlantic coast. Nanclares, based in the village of Castrelo (Cambados), was founded by Alberto Nanclares in 1997, has become one of the most coveted producers in the region and now with the hugely and youthful talents of Silvia Prieto by his side the winery has been able to explore many exciting variations of Albarino, such as this thrilling O Bocoi Vello de Silvia, as well as doing a few reds now, mainly from Mencia grown in the Ribera Sacra, which also are absolutely delicious. The Nanclares y Prieto wines show brilliant clarity, sadly they are not easy to find and it will take some work to grab some bottles, but there are very rewarding and I highly recommend chasing them down!

This O Bocoi Vello de Silvia is old school throw back wine, of which Prieto took the lead on, it is 100% Albariño from several plots in Sanxenxo and Meaño areas. Silvia notes that these parcels have vines that are between 25 to 95 years old, and the sites are largely west-facing and planted on a mix of clay, granodiorite, and sandy granite soils, which promote minerallity, vibrant acidity and loads of saline, to go with small yield concentration. The grapes for the O Bocoi Vello de Silvia are all harvested by hand, carefully sorted, and then get foot-stomped in the ancient method, with about two days of maceration on the skins and stems, as mentioned above, which is followed by a gentle pressing in a soft and slow pneumatic press. The Albariño juice sees an indigenous yeast fermentation in reconditioned 90 plus-year-old 1,900L chestnut wood cask, then this unique bottling, as Silvia explains, rests on the lees for 7 months in the same vessel, with weekly batonnage (yeast stirring) for the first month to add complexity and vinous texture to the finished wine. It’s been noted before that Nanclares is loathe to uses chemicals and or additions in his wines, preferring to make natural wines and allowing the grapes, the region and the vineyards to speak without intervention, the Albariño rarely goes through malo-lactic fermentation here and Alberto never adjusts the natural acidity, so the wines always have a sense of tension and purity. Nanclares y Prieto has employed biodynamic methods, as well as using seaweed as compost, and is always trying to improve everything in the vines and in the cellar, to produce energy filled and crystalline wines, as this one shows. This brisk and intense wine goes great with fresh oysters, sardines, sushi and mackerel, especially, but can go with a good range of things from shellfish to poultry dishes.
($35 Est.) 93 Points, grapelive