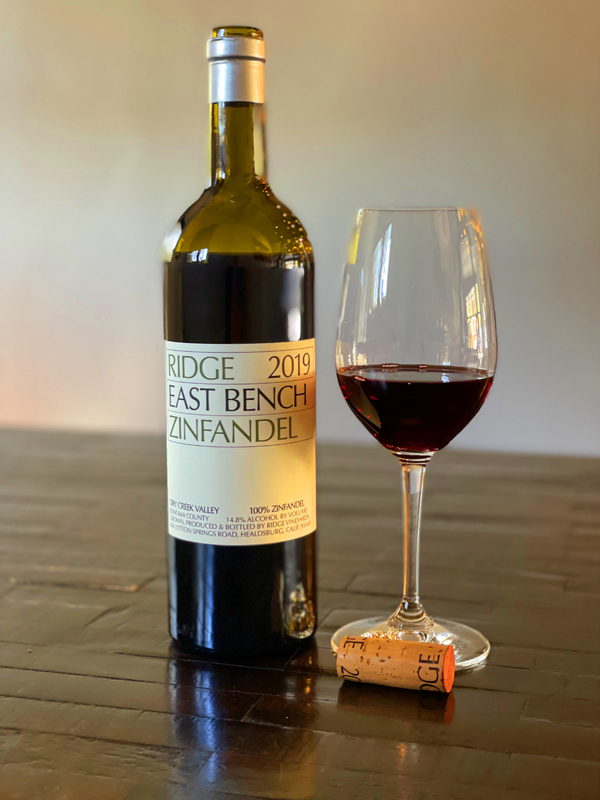 2019 Ridge Vineyards, Zinfandel, East Bench, Dry Creek Valley, Sonoma County.
The 2019 East Bench Zin is beautifully structured and very pure, in keeping with Ridge’s style, there is plenty to admire here and instead of being jammy, it shows a nice bit of grip and firmness with some savory and spicy notes cutting back on the fruit to make for a wine that is good with food and has just the right stuffing to age. The full bodied palate has classic layers of black raspberries, bramble berry, plum and dusty cherry fruits, that is accented by briar spice, minty herbs, cedar and a touch of loam. I was impressed with the natural acidity that keeps things fresh in this 100% Zinfandel bottling which you can tell doesn’t have the usual percentage of Petite Sirah because of the glowing lighter ruby and garnet color in the glass. Ridge is working on its 60 harvest, quite remarkable in this day an age and changes are happening on the winemaking side, with the Lytton Springs facility getting the dynamic and gifted Shauna Rosenblum, as the winery notes, Rosenblum brings a lifetime of winemaking experience with her to Ridge. They go on to add, her father, Kent Rosenblum, of Rosenblum Cellars, introduced his winemaking passion to Shauna at an early age and she has a touch with Zinfandel, after growing up helping make single vineyard versions, much like what she’ll be doing at Ridge. Though originally planted back in 1900, Ridge replanted the East Bench vineyard in around 2001 with specially selected budwood that was chosen from four pre-Prohibition era vineyards. Their excellent quality and quality, Ridge believes is from that excellent and historic pedigree. Like the Zinfandel vines in both Ridge’s Geyserville and Lytton Springs sites, these younger vines at East Bench are all traditionally head trained (no trellis) and spur pruned. Ridge, who instantly saw the promise of this terroir, explains that the ancient soils in this benchland vineyard was formed approximately 80 million years ago and has a mix of clay loams with ancient river rock, it is nicely iron-rich and is reddish in color. The spot is ideal for growing wine grapes, especially Zinfandel, which thrives here. The winemaking here is natural and no nonsense with native yeast fermentation, all organic grapes, 100% de-stemmed and aged in air dried American oak barrels, only 10% new, for a year, all giving the results you’d expect from Ridge!

As Ridge begins its 60 year celebration, it fun to re-visit their history since three scientists from Stanford University’s Research Institute (SRI), where my own father worked after leaving the Army in the early 1960s, and their families formed a partnership and bought Dr. Short’s property on Monte Bello Ridge back in 1959, that became the famous estate high up in the Santa Cruz Mountains. The three founding partners here at Ridge, Dave Bennion, Hew Crane, Charlie Rosen were engineers and along with the wives got things started and make their first wine in 1962, but it was until the legendary Paul Draper joined as the winemaker, that things got serious and his early efforts turned Ridge into one of the state’s best wineries, especially their old vine Zinfandel bottlings and later the famous Monte Bello Bordeaux Blend, which is one of the greatest wines in the world. Draper’s third vintage saw Ridge’s international breakout, when the 1971 Monte Bello came in 5th in what was later called the Judgement of Paris Tasting, when English wine merchant, Steven Spurrier organized a tasting of California Cabernets and Chardonnays that were pitted against top French wines, and to everyone’s surprise, especially Ridge, the California wines beat the French in both the red and white flights, and the rest is history, as they say. These days, Draper is retired and John Olney, who joined Ridge as Cellar Worker at Monte Bello in 1996, is now the head winemaker and CEO of Ridge, his hand has been in most all of Ridge’s modern Zins and now has the talents of Shauna Rosenblum at Lytton Springs, as mentioned above, where this wine was made, and Trester Goetting, formerly at Biale Vineyards, at Monte Bello, meaning Ridge, with their new generation of talent, has a bright future ahead. Goetting, has some big shoes to fill, but has plenty of experience and expertise, he was the winemaker at Napa’s Krupp Brother’s Stagecoach Vineyard and worked in winemaking at Ladera Vineyards on Howell Mountain, plus did a stint at St. Clement Vineyards, so he should feel comfortable with Mountain fruit! Honestly it is hard to imagine a winery with more commitment to quality than Ridge, the range of wines here is incredible and every single wine is compelling and delicious, from their awesome Bordeaux style Monte Bello to their large production offerings like the Three Valleys Zin, the winemaking is impeccably done, whenever you grab a bottle of Ridge, you know you are in for a treat!
($35 Est.) 92 Points, grapelive