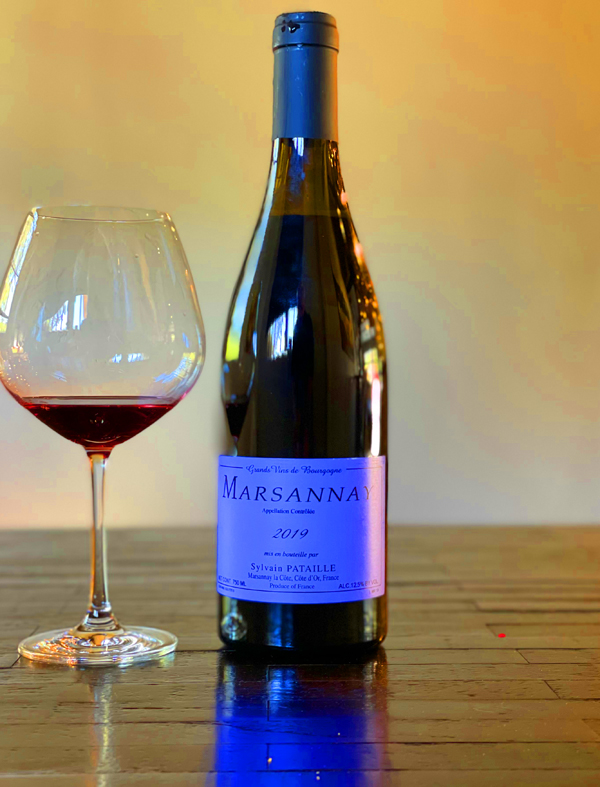 2019 Domaine Sylvain Pataille, Marsannay AOC Rouge, Red Burgundy, France.
Fast becoming one of my favorite Burgundy producers and a great value, the Domaine Sylvain Pataille, based in Marsannay-la-Côte, in the Côte de Nuits (located in the Northern reaches of the Côte d’Or), this small winery is the work of Sylvain Pataille, who is a attracting a lot of attention and praise for his naturally styled and authentic offerings, mostly Pinot Noir from small organic parcels in the Marsannay AOC, like this one from the 2019 vintage, which is simply outstanding with loads of personally and character. This brilliant ruby colored Marsannay has a nose of earthy red fruits, black tea and wilted roses which echo on the medium bodied palate with fresh raspberry, black cherry and red currant fruits, brambly spices, mineral tones, youthful vibrance with zesty acidity and underbrush, making for an exciting, partial whole cluster, and expressive Pinot Noir. I’ve been following Pataille’s wines, imported by the late Becky Wasserman and company, since his 2012s were available here in California and I’ve very much enjoy every bottle I’ve opened, they are everything I love about old school Burgundy and they are exceptionally well priced for the quality in the glass, especially vintages like this one. The basic Pataille Marsannay AOC Rouge is lively, seductive and fun in its youth, so while capable of aging a dozen or so years, it is hard not to drink them up now and since the cost is pretty guilt free for Burgundy, there is no sense of remorse!

The Sylvain Pataille wines come from holistically farmed grapes, he’s been certified organic since 2008 and is practicing biodynamic in his own and leased parcels and uses a gentle touch in the cellar, when he ferments with native yeasts and mostly whole cluster. The aging of the Pinot Noir is done with between 15-30% new oak, depending on the vintage and the age of the vines, with this one seeing the least amount of new barrels traditionally and Sylvain only uses ultra low sulfur doses and only at bottling to keep things as natural as possible. While I tend to focus Sylvain’s Bourgogne Rouge and Marsannay bottlings, which are utterly delicious, he does some rarities too, including little know grapes like Pinot Beurrot and Chardonnay Rose, a bright pink skinned grape that I’ve never actually tasted, but is intriguing enough for famous California Sommelier Raj Parr to plant Chardonnay Rose at his own estate vineyard in Cambria, maybe inspired by Pataille’s version. As well as these, Pataille does a couple of Chardonnay wines, along with a geeky cool set of Aligoté Dorés, which are sometimes harder to find than his reds! The Marsannay Rouge comes from mature, small yielding, vines across the village appellation that were planted from 1950 to1980 on the chalky marl and gravelly soils, with a blend of multiple mini terroirs across this region. The vinification here, as noted saw 30% whole-cluster, with partial stems, indigenous yeast fermentation, hand punch downs and gentle pressing, then the Marsannay was aged for 18 months in mostly older oak barrels, which works fabulous well, as this wine proves!
($45 Est.) 93 Points, grapelive