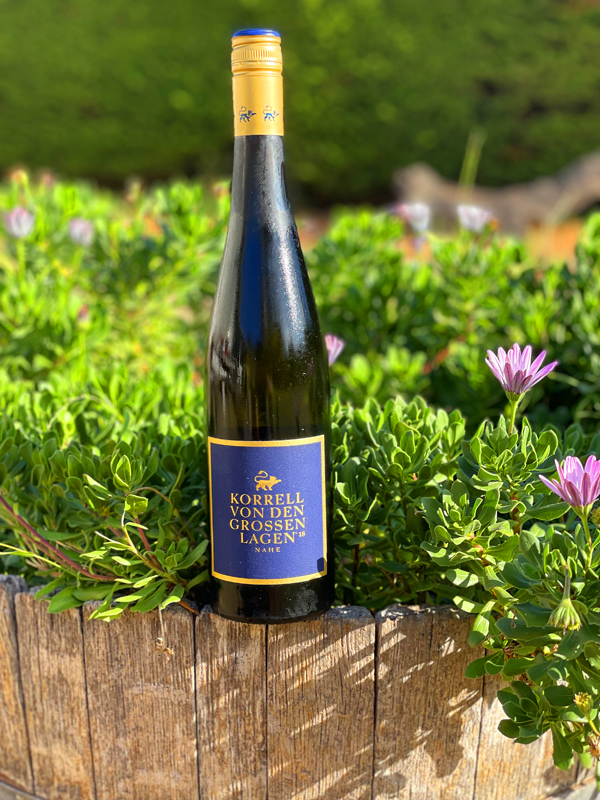 2018 Weingut Korrell, Riesling Trocken, Von den Grossen Lagen, Nahe Germany.
Just like the beautiful 2016 and later the 2019, this vintage of Weingut Korrell’s Von den Grossen Lagen is a complex dry Riesling that transmits this region’s best features, following in the form of recent releases, this wine flows across the palate with layers of bright tree picked peach leading the way along with tangerine, apricot, kumquat and quince fruits, which is again supported by steely/smoky wet shale, rose oil, lime blossoms, verbena and grey sea salts. There is a lovely generous nature this quality effort, a leesy richness and density in this 2018, that is wonderfully compelling that and highlights the Nahe’s excellent terroirs and depth of flavors, making it one of Germany’s best regions, especially for these Cru vineyard sites, which Korrell has captured in the bottle here. This is exceptional dry Riesling and a stunning value, costing much less that most Grosses Gewachs that it compares well with. As noted here in my prior reviews, Martin Korrell, the sixth generation of the Korrell family, is the talent behind this ambitious and innovative estate, he has a wonderful palate of diverse soils to work with here, not far from the likes of Donnhoff, Schlossgut Diel, Hexamer, Gut Hermannsberg, Kruger-Rumpf and Schäfer-Fröhlich. There is volcanic, slate, quartz and gravel in the Nahe, plus Korrell has their prized single vineyard monopole Paradies cru vineyard which is set on mineral intense clay and fossilized limestone, that gives Korrell’s flagship Riesling a fantastic textural richness and depth that reminds me of some of the great Pfalz GG’s, and this one is not far off of that. The Korrell family, as mentioned here a few times, has Spanish roots, has a long winegrowing tradition going back 250 years or more, with their Nahe farming property dating back to 1832, though really fine tuning the focus to exclusively wine production in 1967 when Wilfried Korrell convertied it all vines.

Based in the Bad Kreuznach-Bosenheim area of the Nahe River Valley, Weingut Korrell Johanneshof, as noted, is one of the breakout stars to just hit the American wine scene and the latest releases are spectacular terroir driven efforts, in particular I love their Monopol (single estate cru) Paradies Trocken and this Von den Grossen Lagen, which comes from an amazing selection of GG’s (VDP Grosse Lage) sites and a mix of the regions different soils. It can’t be called a Grosses Gewachs because it is not a single vineyard, but it has the class and the depth to certainly be considered a true Grand Cru with its cool crushed rock and sunny array of yellow fruits, spice, vitality and impressive concentration. The Von den Grossen Lagen Riesling Trocken comes from some of the middle Nahe’s greatest vineyards including Schlossbockelheimer in den Felsen, a site that Donnhoff uses in one of their own great Grosses Gewachs, Schlossbockelheimer Konigfels, which is on porphyritic (volcanic) soils, Norheimer Kirschheck, again a famous Donnhoff vineyard set on slate soils, and an ultra steep parcel at Niederhauser Klamm known for it’s driving minerallity. Martin notes that, the fermentations for the single sites is done separately, the Norheimer Kirschheck begins as always with native yeasts and it is fermented in oak barrel, adding that he uses more classical methods on the other three crus, employing special yeasts and colder ferments in steel tanks, then all the wines see more than six months on the lees, allowing a sensational mouth feel to develop, then expertly blended to make a wine that highlights the very best of the region and the vintage. Every wine I’ve tried from Martin Korrell at Weingut Korrell has been seriously rewarding and I highly recommend searching their wines out, especially this outstanding lightly golden Von den Grossen Lagen bottling, along with rest of their collection of Trocken Rieslings and their Brut Sparkling Riesling and Pinot Noir Sekts.
($35 Est.) 93 Points, grapelive