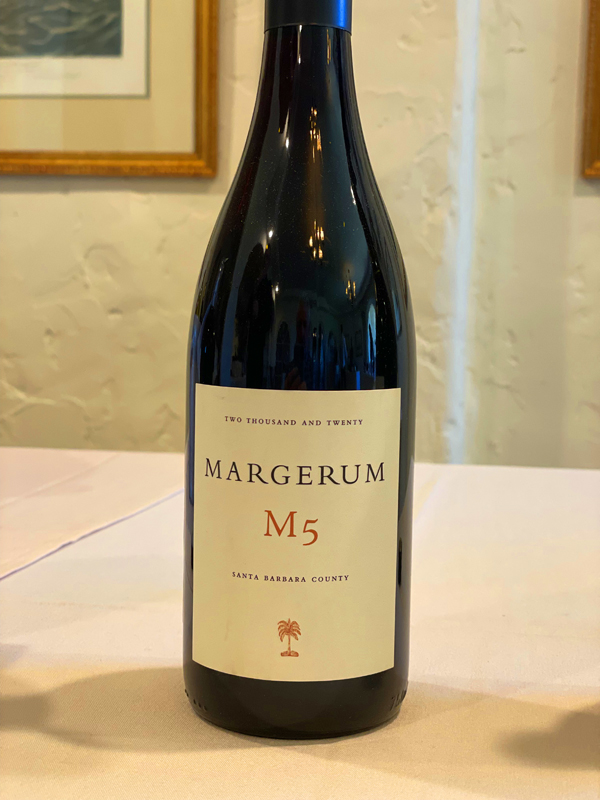 2020 Margerum Wine Company, M5 Rhone Blend, Santa Barbara County.
There’s a lot to love with the latest releases at Margerum, I really enjoyed this lineup, along with, as mentioned in prior reviews, the Cinsault, Margerum’s Riviera Rosé, the Sybarite Sauvignon Blanc and the Syrahs, I was thrilled this M5 Rhone Red, which is drinking fabulous right now. As well as the wines, I was impressed with Margerum’s intensely herbal California Amaro, which is a rare Digestif, rivaling the best from Italy! This dark purple/garnet 2020 M5 is full bodied and luxurious on the palate with authentic Rhone warm and density, along with subtle meaty and spicy elements that folds nicely behind layers of black raspberry, boysenberry, plum and pomegranate fruits, along with hints of lavender, peppercorns, sandalwood and anise. The M is for Margerum, and the 5 is for (the) 5 grapes in the M5, with Grenache, Syrah, Mourvèdre, Cinsault, and Counoise being the grapes of choice here. Like Southern Rhone offerings the M5 is led by Grenache and it has the generosity you’d expect from this varietal, making for a nicely balanced and expressive wine that is perfect for the Fall and Winter cuisine seasons. Margerum says his Grenache based M5 has lush fruit forward flavors initially, that impacts the palate, followed by a finish complete with hints of jam, cocoa and dark berry, with the Syrah adding richness and power, Mourvèdre adding earthy, old world notes, the Counoise adds aromatics of watermelon and the Cinsault adding a spice component and a freshness to this tasty stuff. The M5 is largely estate sourced, but there’s also some purchased grapes from top vineyard sites in the Santa Barbara region that Margerum has long worked with.

Doug Margerum’s Margerum Wine Company, focused primarily on the bounty of Santa Barbara’s diversity from Los Olivos to Happy Canyon, is committed to handcrafted small lot wines sourced only sustainable sites and top quality grapes. Part of Doug’s mission statement is the make wines with a true sense of the place, with pride of where they are grown. Margerum leans toward wines produced naturally, as well as, as they state clearly, to make wines that have individual character and personality with their flagship M5 Rhone Red being a wine that is inspired by the wines of Gigondas and Chateauneuf du Pape, but still having its own identity. Doug Margerum, as I have noted here, is mostly known for his Rhone Reds, like his Syrahs and this M5 Chateauneuf-du-Pape style red blend, has been involved in the Santa Barbara food and wine scene for over 35 years, especially for his time at the legendary and award winning Wine Cask restaurant downtown Santa Barbara where he presided over one of the state’s best wine lists. The Margerum Wine Company began a bit later in 2001, and was inspired by Doug’s love of local wines and personalities, with his close friendship(s) with with Bob Lindquist (Qupé) and the late and much missed Jim Clendenen (Au Bon Climat), being instrumental in his start. The winemaking is mostly old world in style with some whole-cluster in the reds, like this one, with was tank fermented in small lots and pressed to a combination of 50% neutral puncheons and almost 50% neutral barriques, with just a few new barrels thrown in. Margerum, along with the selection of reds, it should be noted, also does a fabulous set of whites and a Provence style Rosé, with their Sybarite Sauvignon Blanc being outstanding stuff, all of which I recommend.
($30 Est.) 92 Points, grapelive