Grapelive: Wine of the Day October 12, 2016-Live from Germany 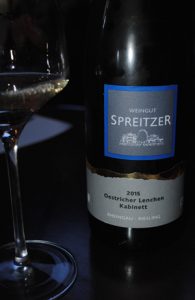 2015 Weingut Spreitzer, Riesling Kabinett, Oestricher Lenchen, Rheingau Germany.
A visit to Spreitzer isn’t complete without tasting the fabulous Oestricher Lenchen Kabinett, maybe my quilt free favorite of Andi’s wines, this fruity Riesling is rich and opulent with fresh detail and nice balance of sweet and tangy with lush layers and vibrant acidity. Not far from Spreitzer is the famed Kloster Eberbach founded in 1136, the famous monastery where they filmed the “Name of the Rose” from Umberto Eco’s novel with Sean Connery, local winemakers are have said to have gotten Sean very drunk, and he returned the favor on a return visit to the region with a case of single malt! And also more importantly where for centuries the monks made some of the world’s most sought after wines from the upper Rheingau, and their top wine was Kabinett level Riesling, it in fact had it’s own holy cellar room, which you can still visit today in the museum tour. Markus Roll, Weingut Leitz’s vineyard manager took me there, showed me the Cabinet Room (Kabinett) and told me the story, a local legend, later repeated by Andreas Spritzer to me, of the lazy horseman, each year the monks would send a rider to the bishop to get his blessing to pick the grapes, after which when the horseman got back harvest would begin, but one year the horseman, much rumored to have been fond of drink and women took ages to return, and when he did the grapes were way beyond Kabinett level, and were picked extremely late, hence the term Spatlese (late picked) coming into being, well the short story is that the bishop liked the sweet stuff even better, and from then on Spatlese became the higher ranked wine, Johannisberg even has a statue of the horseman in front of their winery, as they were maybe a bit better at the sweeter wines! But, Kabinett, even getting the shaft by the lazy horseman, still remains a mainstay wine and Spreitzer’s Oestricher Lenchen is an outstanding version. The 2015 vintage is just delicious with plenty of apple, wild peach, tangerine and cool apricot fruits from the Loess and loamy soils close to the Rhein, which in this area is almost like having lake effect, as the Rhein is at it’s widest point here, it’s an early ripening site which give forward fruit and nice polished acidity. The 2015 is one of the best vintages I’ve had of Spreitzer, and the lush detail and refined character make it very pleasing, but it has good extract and vibrancy to not feel heavy, it is a wine to enjoy now, but should age well to, and it’s a steal, the complexity and mineral undertones hint at it’s long drinking window. Notes of white tea, pineapple, lime blossom and saline along with white plum, earthy stones all add to the whole of this classy Riesling, and the mouth feel hints at the leesy style that Spreitzer employes, enjoy now or later, best from 2016 to 2026.
($18 Est.) 90 Points, grapelive