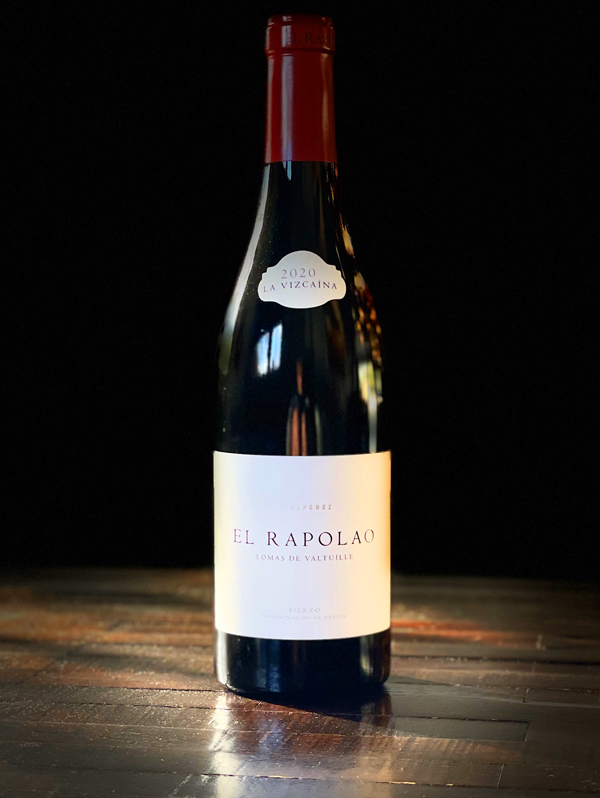 2020 Bodegas y Viñedos Raúl Pérez – La Vizcaina, Mencia “El Rapolao” Lomas de Valtuille, Bierzo DO, Spain.
The gorgeous and brightly detailed El Rapolao, crafted by the legendary Raúl Pérez, is mostly his loved old vine Mencia, but with some Bastardo (Trousseau) and Garnacha Tintorera (Alicante Bouschet), that are interplanted and co-fermented, all from organic 100-year-old vines in the Bierzo’s renowned El Rapolao Cru in Lomas de Valtuille, this dark and vibrant wine delivers an awesome performance, getting better and better as it opens up. There’s an exciting thrill to Raúl Pérez’s wines and this one impresses with its purity and vibrancy, with a medium bodied palate of fresh blackberry, currant, black cherry and tart fresh picked plum along with some nice spicy accents, mineral notes, snappy herbs and pretty florals. For his El Rapolao, Pérez, the godfather of modern Mencia wines, used 100% whole cluster and a natural yeast fermentation in a large chestnut wood cask, with this wine seeing at 30 day maceration on the skins to extract color and depth of flavors here. After fermenting and macerating the wine was gently pressed to a combination of oak, which were neutral (well used) French 225L and 500L barrels, where the wine matured a full year before being bottled unfixed and unfiltered. The terroir here, set on sandy and clay based soils, is less affected by the Atlantic Ocean than the Ribera Sacra and is more continental in climate and the vines get a bit more sun and warmth, making for more concentration, as this El Rapolao shows, this wine has the stuffing to age for another decade with ease.

Raúl Pérez, who is well admired around the world now, helped put the Bierzo appellation on the map and has been a winemaker of note since he was 22 years old when he took over the job for his family’s winery back in 1994. To explore his own path, he started his Bodegas y Viñedos Raúl Pérez in 2015, and this label has been a source of some greatest and most distinct Spanish wines in modern times. Raúl has, as his importer notes, expanded his sphere of activity to include the appellations of Rías Baixas, Ribeira Sacra and Tierra de León, but his biggest passion is the old vines in Valtuille de Abajo, his home village in Bierzo, where his family has been tending vines for well over 300 years. I’ve met and tasted with Raúl Pérez on a couple of occasions, making for some incredible experiences, and I try not to miss a chance to sample his wines, I buy a few bottlings for personal enjoyment almost every vintage, with this El Rapolao being my latest purchase. While mainly doing Mencia based wines, Pérez does some other rarities like Prieto Picudo, a grape that is almost unknown outside of the Castilla y León region, which makes for a unique Nebbiolo like wine, plus Raúl’s whites are fabulous as well, with his Godello offerings rivaling outrageously expensive White Burgundies! To get started, those who haven’t had Raúl Pérez’s wines, I recommend getting his lovely entry level Ulteira St. Jacques Mencia and this El Rapolao, a deeper expression of Mencia. These offerings are sublime values and deliver everything that is promised, they also are outstanding wines to enjoy with food, and are a great way to celebrate your holiday meals, going excellently well with a wide range of dishes.
($40 Est.) 94 Points, grapelive