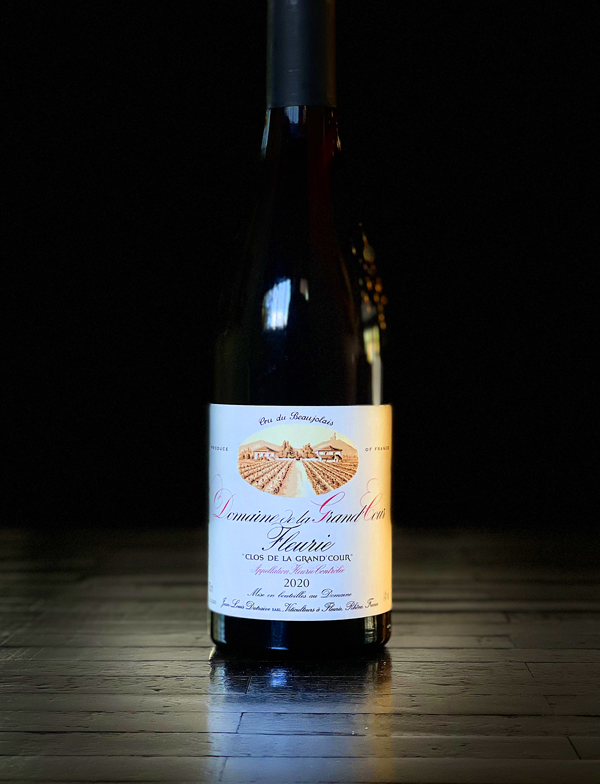 2020 Jean-Louis Dutraive, Domaine de la Grand’Cour, Fleurie, Clos de la Grand’Cour, Cru Beaujolais, France.
This delicate and seductive Domaine de la Grand’Cour Fleurie “Clos” by Jean-Louis is haunting and heavenly in the glass with its pale ruby/magenta hue and rose petal perfume has the grace of a Premier Cru Chambolle-Musigny and pure Gamay flavors on the lifted medium bodied palate which shows strawberry, cherry, crushed raspberry and plum fruits that are weightless and seamless, along with hints of mineral, walnut, red peach flesh, red spices, cut flowers and anise. It’s hard to find anything here that isn’t near perfect and precise, this is exceptionally graceful and lingering, echoing its soulful strawberry and rosewater core elements in the aftertaste seemingly forever. The foundation of the property, which has in the talented hands Jean-Louis Dutraive since 1989, are thethree prestigious lieux-dits of Clos de la Grand Cour, used here, the Chapelle des Bois and Dutraive’s special Champagne parcel, which make up a total of 9 hectares of vines in Fleurie, arguably the most prized sites in the appellation, all of which are holistically and naturally farmed. In the cellar, the wines are fermented naturally with carbonic maceration (to start) indigenous yeast and are macerated on the skins for up to 30 days. Then the juice is gravity fed to the cellar for aging, usually between 6 to15 months, depending on the cuvée and without SO2 additions. The elevage, cellar aging, here at Dutraive, is done mostly in used Burgundy barrels, while a few wines are raised exclusively in concrete tank, as well a portion that sees stainless steel, this depends on what the vintage brings and fruit intensity. Though interestingly and uniquely here, the Clos de la Grand’Cor saw a very different regime, somewhat specialized to itself, getting 35% in stainless steel, 30% in fûts de chêne and 30% in larger foudres for 9-12 months, all of which is done to promote its translucent clarity and transmit the sense of place here.

It’s well known in enthusiasts circles that Fleurie is perhaps one of Beaujolais’ most elegant appellations and Dutraive’s versions are some of the most beautiful wines in the world, with this vintage of the Domaine de la Grand’Cour being absolutely gorgeous with all the subtle nuances you’d expect from this fabulous producer. Fleurie, like the other Crus of Beaujolais, especially the more powerful Morgon, is perched up in the north half of Beaujolais, at good elevation and is dominated by more the more complex soils, including schist and pink granite that might explain the delicacy and quiet depth of these remarkable wines. At Jean-Louis Dutaive’s estate, their Fleurie vines, on their granite soils, are traditionally and organically farmed with great care to produce the ripest and healthiest Gamay grapes, much in the same way the other legends of the region do, like Lapierre and Foillard, which has led to the region’s renaissance and has made Gamay, once maligned, a much admired varietal in modern times. This Clos de la Grand’Cour is a true clos (walled vineyard) and it is an eight hectare monopole of Dutraive family that is 100% Gamay Noir, certified organic, with a vine age that ranges from 30 to 70 years old. Dutraive has a stunning lineup of Cru Beaujolais, each a terror driven treasure, all of which are just as sought after as any cru Burgundy these days and it is a rare treat for me to get my hands on any of them let alone this one, which is one of the winery’s most coveted bottlings and signature offerings. Dutraive, now 60 plus years old, has proved he still a Gamay maestro, even with his son Justin showing his potential now in the family business, says this Clos, his flagship Fleurie, defines Dutriave terroir and style with exotic spices and rustic beauty. I love that Jean-Louis’ motto in the cellar is “minimal intervention and maximum surveillance.” which you can see clearly in his wines and their authentic nature, they always provide a raw and alluring sex appeal and a feminine charm, don’t miss a chance to try these wines.
($45 Est.) 95 Points, grapelive