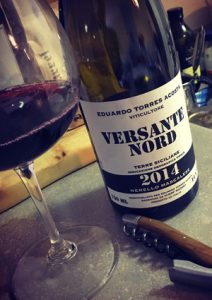 2014 Eduardo Torres Acosta, Nerello Mascalese, Versante Nord, Terre Siciliane, Italy.
Eduardo Torres Acosta is a young winemaker that has been in Sicily since 2012, coming from the Canary Islands and working with Arianna Occhipinti, one of Sicily’s most dynamic talents, and now has released his first solo effort from Mount Etna, and it’s an outstanding Etna Rosso with natural/earthy sex appeal and old world charm. Because Eduardo is making his wines at Arianna Occhipinti’s estate, he can’t call the wine an Etna Rosso DOC, but is all volcanic Nerello Mascalese that comes from choice leased plots. The young Spaniard got the attention of famed Etna producer Passopisciaro and is now working there as an enologist, after his apprenticeship with Ms. Occhipinti, and even though an outsider in a new place he has flourished and become part of this tight island community quickly and his wines will certainly gain him much wider attention as well. The deeply hued 2014 Versante Nord is slightly funky and reduced as many natural wines are at first, it reminds me a little of an old Domaine Maume or a young Henri Gouge Burgundy in that way, but once decanted and aired out gorgeous pure Nerello Mascalese details coming out with trufflely notes mixed with floral character, cinnamon stick, dried roses, flinty spices with dusty plum, strawberry and black cherry fruits as well as shale stone, dried currants, minty lavender and blueberry skins. This is really good and exciting wine, from a region that is getting a lot of buzz right now, it has everything you’d want, and even with the funkiness the beautiful mouth feel and vitality will win you over, this is a classic Etna, a rustic/raw terroir driven beauty! It needs plenty of air and should be paired with food to show it’s true potential and textures, but it is an impressive first effort and is very stylish and rewarding, this is a label to search out and keep an eye on, well made and well priced too, imported by Farm Wines and Louis Dressner, same as Occhipinti.
($30 Est.) 92+ Points, grapelive