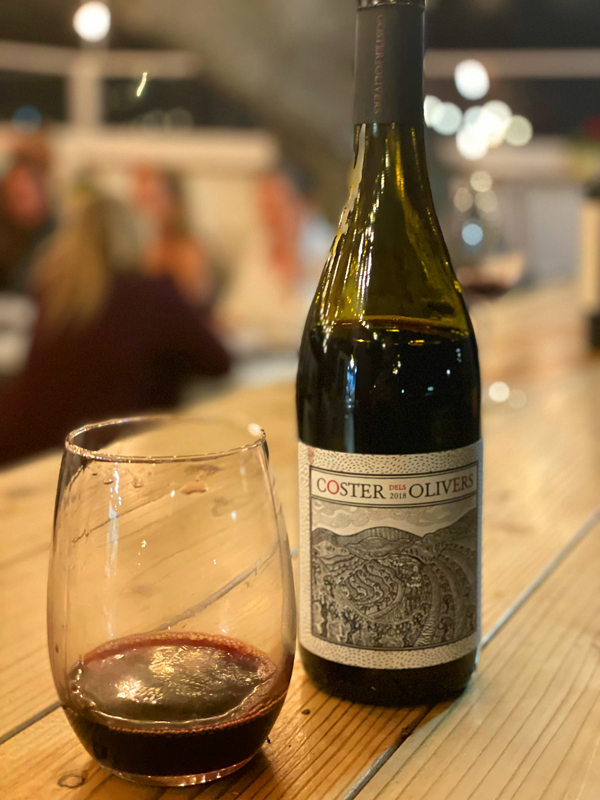 2018 Coster dels Olivers, Priorat D.O., Catalonia, Spain.
The inky purple and opulent 2018 Coster dels Olivers red by winemaker Joan Sangenis comes from the Priorat’s intense and small yielding vines, set on slatey hillsides, with a blend of Carinyena (Carinan), Garnatxa (Grenache) and Cabernet Sauvignon, all classic varietals found in this dramatic region, with this wine perfectly capturing the terroir here. The palate is dense and mouth-coating, slightly smoky and loaded with blackberries, currant jelly, plum and kirsch fruits along with liquified violets, dried herbs, mocha and black licorice unfolding in the glass, held all together with sweet tannin which feels almost creamy, but still providing grip here, making for a wine that impressively tastes more like a hundred dollar wine than the twenty bucks this will cost you. The modern Priorat wines are in part the result of the pioneering four founding estates of the Priorat, led by Daphne Glorian, Alvaro Palacios, Josep Luis Perez, and Rene Barbier, who took this remote and almost forgotten region from obscurity to world wide acclaim (and fame) with their dark and powerful efforts in the course of just more than a quarter of a century.

The Coster dels Olivers Priorat red is sourced from sustainable bush vine vineyards with organic farming methods, with all the grapes being hand harvested and carefully sorted before reaching the cellar. The fermentation is done in a combination of stainless steel tanks and concrete vats, after which the wine is allowed to macerate with hand punch downs for an extended period before it is pressed to casks to mature. The aging, for this Coster dels Olivers, as the winery notes, is in well seasoned and neutral used French (90%) and Hungarian (10%) oak barrels, including 220L, 300L and 500L formats to promote purity, while allowing the wine to soften and develop its luxurious nature and richness of detail. This Coster dels Olivers is a blend of 60% Carinyena, 30% Garnatxa and 10% Cabernet Sauvignon that is grown on slate/schist soils by the Sangenis family in Porrera, with this offering getting fruit from the cooler northern exposure and vines that range from 15 to 65 years old that are up close to 500 meters above sea level, these vineyards see hot days and cool nights, making for a nicely balanced effort here. Those that love big, dark and juicy wines will immediately be seduced by this Coster dels Olivers and will want to grab this stuff by the case load and enjoy with hearty cuisine!
($20 Est.) 93 Points, grapelive