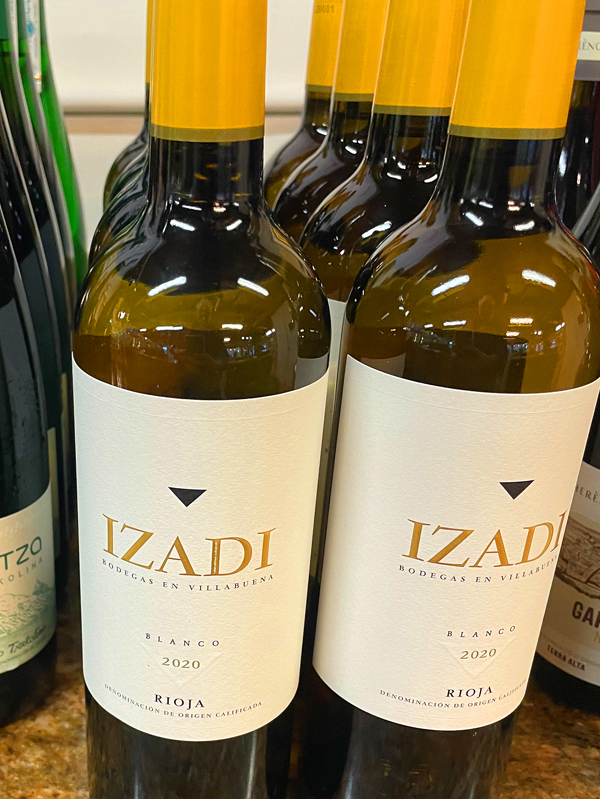 2020 Bodegas Izadi, Rioja Blanco, Rioja D.O., Spain.
In a recent tasting of an eclectic mix of Spanish wines, I was reminded that one of the most overlooked categories in Spain is the Rioja Blanco offerings, always over shadowed by the reds here and the country’s more hip whites, like the Rias Biaxas Albariño(s) and Godello, the other Galician white catching a lot of attention in recent years, but wines like Izadi’s Rioja Blanco prove this region is still relevant. The masterful and classic Lopez de Heredia, maybe the region’s most prized and iconic bottling, and Remelluri’s gorgeous and rare version, are not to be missed white Rioja offerings, of course and well known by collectors and enthusiasts, though wines like this Izadi give a good account of themselves too and are extremely affordable. The 2020 Izadi is made from blend of indigenous varieties Viura, Malvasía, Garnacha Blanca, Tempranillo Blanco, Maturana Blanca and Turruntés, making for a complex and entertaining dry white that has a lovely textural mouth feel and round mineral tones with layers of citrus and fleshy orchard fruits, sitting nicely between a crisp Sauvignon Blanc and a more lush Chardonnay, it goes wonderfully well with appetizers or tapas and or sea food dishes. The wine starts subtly with a hint of white blossoms, wet stones and clove spice before the medium bodied palate opens up to reveal some apricot, lemon and golden fig fruits and a lessy creaminess, without losing its vitality, this wine quietly impresses and is very enjoyable. This vintage really gave a strong performance and I highly recommend Izadi’s Rioja Blanco for its value and especially those that what to get a full picture of Rioja’s wines, the winery, Interestingly also has the very desirable Finca Villacreces property in the Ribera del Duero, which is also a great value.

Located in the small town of Eskuernaga, Bodegas Izadi uses a collection of old vine vineyards located in Villabuena, Samaniego and some ancient recovered vineyards in Rioja to make their delicious Rioja Blanco. The white is crafted from 65% Viura, the region’s most popular grape, 10% Malvasía, 10% Garnacha Blanca, 5% Tempranillo Blanco, which is a mutation of the red grape and also known as Albana, 5% Maturana Blanca and 5% Turruntés. Like what happened in Burgundy, generations ago, when some Pinot Noir vines seemingly mutated overnight to a white varietal becoming a new grape, Tempranillo Blanco is a recent discovery here, first noticed in 1988 by a wine grower in a Tempranillo vineyard near Murillo de Río Leza in the La Rioja province, and it is now allowed in white Rioja wines. Viura, the most important white grape of Rioja, which plays the dominant role here, retains vibrant acidity and is long lived in the bottle, and In Catalonia, Viura is called Macabeo, where it is the primary varietal in most Cava sparkling wines. The Izadi Blanco, made by winemaker Ruth Rodríguez, comes from mainly the higher elevation Rioja Alavesa zone, from vines mostly from a 1960 planting, at close to 500 meters above sea level on the classic clay based chalky soils, along with an Atlantic continental climate with just a touch of Mediterranean influence. The vinification for the Izadi Rioja Blanco is traditional with all de-stemming fruit and a stainless steel fermentation with no malolactic allowed before being aged mainly in stainless with a small portion seeing an elevage in oak casks, which adds a touch of richness here, it is a wine that should be enjoyed over the next 2 to 3 years.
($20 Est.) 90 Points, grapelive