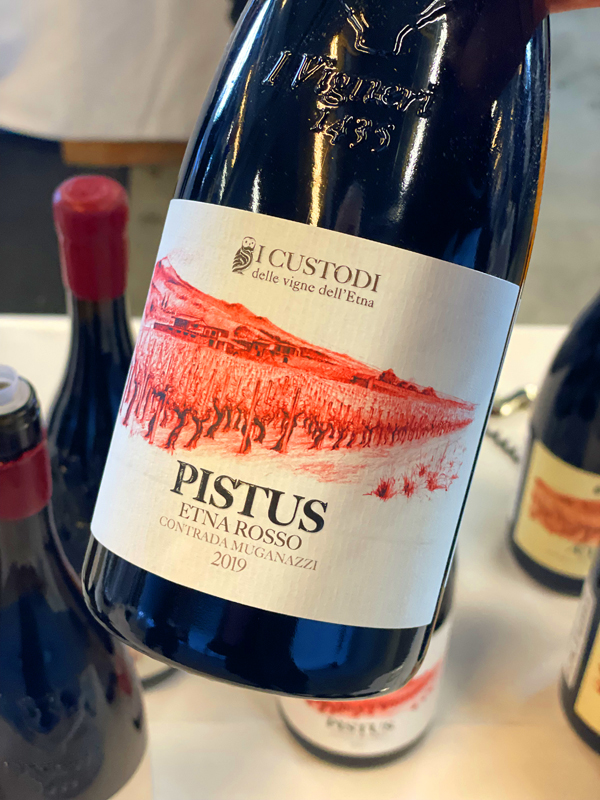 2019 I Custodi, Pistus, Contrada Muganazzi, Enta Rosso DOC, Sicily, Italy.
The 2019 I Custodi Pistus is loaded with personality, very similar to early efforts I have reviewed, with a nice tension on the medium bodied palate, showing an exciting intensity with brandied cherries, dried flowers, iron mineral tones and red spices leading the way. This is gorgeous stuff that adds plum, candied orange peel, anise, tobacco leaf, crushed rock, sanguine and lavender accents as it opens up and the textural nature comes through, and while structured it has supple elegant tannins and the Etna volcano terroir influences are very much in the foreground in this brilliant effort by I Custodi. I Custodi is run by Mario Paoluzi and relies on I Vigneri, led by Salvo Foti, and his team of Etnean winegrowers, plus Ciccio the mule to tend the vines and make the wines in the ancient way of Etna, as it has always been on Mt. Etna for centuries, without synthetic chemicals, as Paoluzi puts it, in respect of the people, the classic stone terraces, the landscape and the nature. This dark ruby Pistus Etna Rosso, mainly organic and young bush vine Nerello Mascalese, 80% and 20% Nerello Cappuccio, is grown in a steep terraced parcel, with the classic lava black soils, making for a wine that transmits a real sense of place.

The Salvo Foti made I Vigneri I Custodi delle Vigne dell’ Etna wines, both red and white, are all outstanding efforts and what I tasted of their latest collection of releases were some of my favorites at the Slow Wine tasting in San Francisco, which included this beautifully crafted and soulful Pistus, single site Mount Etna Nerello Mascalese based red, coming from the Contrada Muganazzi, high up on the volcano. The vineyards are up at 2,000 feet with sandy and mineral charged soils, with this wine being sourced at Paoluzi’s Northside Contrada Muganazzi, which provides ripe fruit, but with lots of natural acidity, which adds excellent balance and life to the wine. The grapes were all hand harvested with extreme care and methodically sorted and then brought to the winery in shallow crates, where they are crushed after de-stemming, but can see about 20% whole clusters with partial stem inclusion, depending on vintage, that are in some years included. The fermentation, maceration and aging done exclusively in the stainless steel tanks, which lasts, as the winery notes, about 22 months total for this entry level offering. Salvo Foti, the godfather of Etna wines, has inspired a generation of wineries and winemakers in this region, which has seen a remarkable rise in quality and transparency in these Etna wines and I Custodi is a producer to look for.
($30 Est.) 92 Points, grapelive