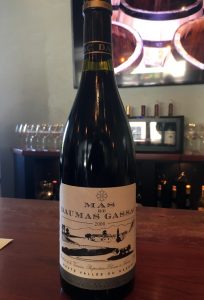 2000 Mas de Daumas Gassac, Haute Vallee du Gassac Rouge, Vin de Pays de L’Herault, Languedoc, France.
The Guibert family’s Mas de Daumas Gassac Grand Vin Rouge is a unique Bordeaux driven blend made from about 80% Cabernet Sauvignon along with about 20% of other grapes which could include Merlot, Cabernet Franc, Syrah, Tannat, Petit Verdot, Malbec, Pinot Noir, with later vintages having some Dolcetto and even some Nebbiolo. Founded in 1971 Mas de Daumas Gassac is set on iron rich red soils in a glacial formed valley in the Saint-Guilhem-le-Désert – Cité d’Aniane area of the L’Herault region of the Languedoc, it’s one of the most iconic estates of the south of France making this unique Red as well as also their equally unique and famous White that is mostly Petit Manseng, Viognier, Chardonnay and Chenin Blanc. The Guibert family now led by Samuel Guilbert, son of legendary Aimé Guibert planted un-cloned Cabernet Sauvignon from the Bordeaux’s Medoc in fact the Daumas Gassac wines, according to the winery, owe their very being to Professor Emile Peynaud, a renowned œnologue, who had famously been an advisor to the Chateaux Margaux, Haut Brion, and Mission Haut Brion, who was a believer in the site and who helped Guibert make the wines, even by phone when needed. Peynaud was a leading light in French wine and at the time of the first Daumas Gassac vintage in 1978 he noted “I’ve advised the greatest producers in France, but never before been lucky enough to be present at the birth of a Grand Cru”, as Mas de Daumas Gassac calls itself. Going back in time to the 2000 vintage recently was a perfect way to examine Daumas Gassac Rouge, and dig deep, beyond the hype and ripeness of youthful new vintages and what I re-discovered was a gorgeous and mature wine of old world class and elegance, it has lots of Cabernet Sauvignon character, but also veins of exotic flavors, tamed tannins and beautiful length and inner perfume. It takes a few minutes to wake up, but layers slowly come alive with a medium/full palate revealing dusty and earthy dark fruits, dried flowers, hints of leather, olive, anise and delicate cassis. The fruit at first is muted by age with a touch of hoisin, sous bois and brandied notes, but after more time a sense of purity unfolds with black cherry, plum, currant and berry forming a core along with a faint kiss of violets, loam and baking spices, it really turns on the charm gaining a real outer Medoc like personality and profile that reminds me of Saint-Julien, though with a sunny warm Mediterranean element that brings you back to this wine’s own terroir. This is surprising fresh in the glass, it still has a nice pop of acidity that adds a wonderful focus and there is plenty of life here, this is really drinking well right now and well within it’s peak window. This Mas de Daumas Gassac Rouge was treated to a long maceration and 20 days primary ferment in stainless steel with about a year to 15 months in French oak casks, from non certified organic vines that were all lovingly hand tended. I was a treat to taste this wine over a 24 hour period, it is full of personality and complex details that expresses itself differently with each hour, it really impressed me. I have had this wine many times in the past as well as many other vintages, mostly more recently like the 2009, 2010, 2011 and up to the 2015 all of which are intriguing, but re-visiting this 2000 was special, if you have it, it’s about time to pop the cork, it’s a treasure with great rewards on offer!
($55-85 Est.) 94 Points, grapelive