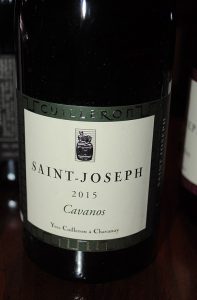 2015 Yves Cuilleron Saint-Joseph Rouge “Cavanos” Vieilles Vignes, Northern Rhone, France.
Cave Yves Cuilleron’s exception Cavanos old vine Saint-Joseph Rouge is a 100% Syrah gem, coming off the terroir’s the granite and alluvial soils and with all hand tended care, it thrills on the palate with purity and perfume along with the vintage’s ripe dense opulence, it’s a stunner that will reward patience, though none will be required as it already offers complexity, depth and generous detailing. I must say both the 2015’s and the few 2016’s I’ve tried from Cuilleron have been just outstanding with expressive fruit, focus and harmonious textural hedonistic pleasures! If you hadn’t heard of this bottling before, there is a reason, Cuilleron added it for the 2015, as he will no longer produce his well-loved “L’Amarybelle.” now his oldest Syrah vineyards with instead be used for this cuvee, the “Cavanos”—from the ancient local name for the village of Chavanay, where the domaine/winery is located, it’s crafted exclusively from this densely planted Syrah vines that are well over 40 years old. The unique site adds a more smoky and fuller profile, Cuilleron de-stems and careful sorts this cuvee’s grapes then gives it a long three week cuvaison in open top vats, then when primary fermentation is finished the “Cavanos” wine is moved into barriques for the malos and then rested and raised for 18 months before bottling, giving an elegant result, more like a modern Cote-Rotie and not like the nervy/stemmy whole cluster style that are such the rage, and while I tend to love the stems, this wine is wonderful. This wine rushes at you and attacks the palate with strong flowing force with a deep violets, a hint of campfire and mouth filling black and blue fruits with layers of black raspberry, boysenberry, briar laced damson plum and cherry fruits as well as pepper, wild lavender, graphite/flinty rock and a touch of wood/cedar, it lingers with touches of earth, cassis and anise. It feels lush and dense, but still has a cut of acidity and youthful tannins to hold firm throughout, best to explore this fantastic Syrah with simple and hearty cuisine. The 2015 Cavanos gets prettier and prettier with each sip adding new flashes of flavors, it is impressive stuff, enjoy over the next 5 to 10 years.
($42 Est.) 94 Points, grapelive