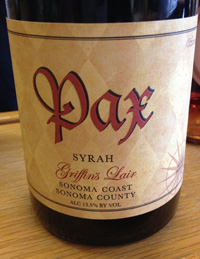 2010 Pax, Syrah, Griffin’s Lair, Sonoma Coast.
Pax is back, the famed cult Rhone style wine label Pax is back and being made by it’s founder Pax Mahle, who after some strange days and style changes has brought back his impressive lineup of wines from top sites that showcase his amazing talents with Syrah and the other Rhone varietals. The 2010 vintage marks his come back after almost 5 years without his Pax wines, though he was never without interesting offerings and his Wind Gap wines remain in force and show his gifted touch with lighter style wines and allow delicious experimentation in fermentations and varietals. For awhile, Pax rivaled Alban for top Syrah, these wines were full bore and amazing rich, but Pax like Wells Guthrie at Copain had a change of heart about how he wanted his wines to taste and age, so dialed back and is now going after finessed wines, more high toned and fresh with lower natural alcohols. Instead of dry port like wines with 15 or 16% on average his new Syrah wines clock in at about 13% to 14%, but still retain loads of character and flavor, this are not weak or meek in anyway, in fact they seem much more impressive and complex than in the past. The 2010 Gfiffin’s Lair Syrah by Pax weighs in at 13.5% and feels rich and vigorous on the palate with a dense core of blackberry, boysenberry, blueberry and damson plum fruit along with Northern Rhone like elements including camphor, white pepper, bacon grease, tarry licorice and flinty pebbles. The wine opens to reveal added layers that show cassis, violets and porcini notes with a lovely play of sweet and savory, this is a very entertaining and pretty Syrah, drink now through 2021, welcome home Mr Mahle, we celebrate the return of Pax.
($64 Est.) 94 Points, grapelive