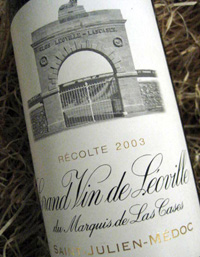 2003 Chateau Leoville-Las Cases, Grand Vin de Leoville du Marquis de Las Cases, Saint-Julien, Red Bordeaux, France.
Leoville Cases is a top Second Growth, one of 15 estates to make the 1855 Classification and was a much larger and renown property until the French Revolution when it was spit leaving a much smaller Chateau and gave birth to Chateaux Leoville-Poyferre and Leoville-Barton in the Haut Medoc area of Saint-Julien. The Leoville’s are in prime Cabernet territory even if there is a bit more clay than in Pauillac or Margaux and while there is a good dose of Merlot in each, they all show classic Cabernet Sauvignon character, especially Leoville-Las Cases. The 2003 vintage was blisteringly hot in France and not many people thought the wines of year would give much in the way of balance or complexity, but surprisingly there are some amazing wines, and this 2003 Leoville Las Cases is showing fantastic right now and should age marvelously well for another decade, maybe it was that clay soil that allowed the vines a bit extra hydration and added to their complexity, it is my idea anyway, but regardless of the reason, this is a stunning Bordeaux and while certainly not cheap, it is a great drinking Bordeaux offering top notch drinking pleasure and detail for what must be considered an off year price, making it a score to anyone that has it. The rich and voluptuous Leoville Las Cases Grand Vin starts with acacia and wild flowers, camphor and toasty wood notes along with dark fruits leading to a full bodied palate that feels lavish with exceptional mouth feel showing blackberry, curranty creme de cassis, mint and cherry plus stony minerals and graphite/pencil lead notes. Everything is held with firm ripe tannins giving some grip to this plumy and powerful wine. Remarkably there is no porty notes or is it flabby, it is starting to fill out, but still remains fresh and vigorous with vivid and vibrant detail, finishing with earthy loam, anise, vanilla/cinnamon, cedar, mulberry and gravel, and while I don’t give much time or thought to Bordeaux these days, this wine got my attention and reminded me of how good some of these wines truly are, this a joyous wine that has plenty of time left and can be enjoyed now, lucky those that have it in their cellar, no question.
($168-200 Est.) 94 Points, grapelive