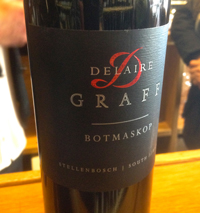 2012 Delaire Graff Estate, Botmanskop, Proprietary Red, Stellenbosch, South Africa.
South Africa has some old vineyards and makes some great wines, and even though I don’t get to taste much of the really great stuff that often, I can certainly sense that good things are happening again in this often overlooked region and from what I did taste recently from Broadbent Selections there are some really good wines available and even more on the way, values and quality. A new one for me was Delaire Graff Estate, from the Stellenbosch region, near the Cape and set in one of the most beautiful wine areas you’ll ever see, near the ocean and with mountains that remind you of the mesas of the American southwest deserts, with glorious vineyards dotting the wild landscapes. The Delaire Graff is an old property and while it has changed hands a few times in it’s history it carries it’s past in the bottle and the latest set of wines are superb, but especially their Bordeaux style red blend Botmanskop which is as good as the latest few vintages of Opus One and would give many a Medoc estate a run for their money. The 2012 Delaire Graff Botmanskop is a cuvee of Cabernet Sauvignon, Cabernet Franc, Merlot, Petit Verdot and Malbec, though I was lead to believe there might be a touch of Pinotage as well, but not officially confirmed, it was gently de-stemmed and fermented whole berry and raised in French oak for about 16 months, the result is a full bodied and elegant wine of graceful fruit, soft wood notes and richly finished. The 2012 shows deep garnet and red/black color and a classic Cabernet and Cab Franc nose with violets, hay, tobacco leaf, smoke, graphite and creme de cassis notes leading to a palate of red and black fruits, spice and cedar with blackberry, opulent cherry and plum along with pencil shavings, vanilla, mocha and mineral/earthiness. This beauty lies in between the heady Napa and Austere outer Medoc in style with polished refinement, good vigorous life, and a super lovely smooth lengthy finish, this is really impressive stuff, a steal at this price, drink from 2015 to 2020.
($25 Est.) 94 Points, grapelive