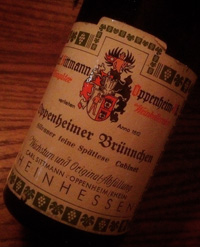 1964 Carl Sittmann, Silvaner, Oppenheimer Brunnchen, Spatlese Cabinet, Rheinhessen Germany.
The star is fading on this most unique wine, but it certainly merits mention and was a highlight of a casual wine dinner, a big thanks to Fred Daniels, a friend that picked up this bottle in Berlin and brought it back to share, it might be the only time I get to taste a 50 year old Sylvaner (Silvaner) that was is such good shape. Considering it’s age and low acidity, this Silvaner Oppenheimer Brunnchen had some very nice flavors and compelling complexity, it has a deep golden/amber color at this point and was almost looking and smelling like an old Sauternes, creamy/oily texture though not really sweet, this was an intriguing old wine in the glass. The 1964 Sittmann Silvaner in 2015 is a bit fragile and falling, but it starts with dried roses, lemony fruits, baked peach, dusty apricot and tangerine and though the off dry fruit doesn’t collapse it does fade behind a savory wild mushroom layer, which at first was like the sun getting cloud cover, but the porcini and chanterelle notes turn pleasing on their own and wine settles again into a stable play of burnt fruit, autumn foliage and tangy ceps, it is remarkable that the wine held on this long, hats off to Sittmann, a winery I’ve never known and one that started back in 1512 in the Rheinhessen. Sylvaner or Silvaner was really popular in the 50’s and early 60’s, it was an easy drinking fruity wine with less firmness and intense acidity than Riesling, it is believed that Silvaner originated in Romania, near and came west through Hungary, Austria and ended up in Alsace, where it is still very well thought of, and of course mostly Franken in Germany, where it comes in those squat bottles and is prized for it’s fresh character, though still found in the Rheinhessen as well, though it competes with a vast array of other varietals these days. Sadly way past it’s prime, the Sittmann shows hints of it’s former grace, prize winning form and charms, it deserves a shout out for being a very nice example and a seriously fun old wine that had seen better days long ago, I bet this was a really good wine at one time.
($80 Est.) 86-88 Points, grapelive