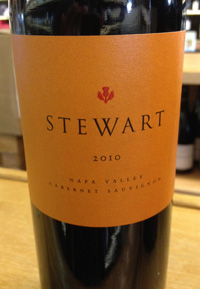 2010 Stewart, Cabernet Sauvignon, Napa Valley.
Paul Hobbs has made the Stewart wines since the beginning and they are consistently delicious and well made, this new 2010 is in fact even more tasty than per normal, in fact it may just be a rival for best yet from Stewart right up there with the 2007. The Stewart 2010 Napa Cabernet shows all the glorious fruit, silky tannins and velvet texture you’d expect from Hobbs, with dark fruits, vibrancy and a long finish this is classy and deep Cabernet from a maestro, no question at all, and look for a good life spam here as well, I’d say it will drink great for 10 to 15 years. The nose is softly perfumed with acacia flowers, mocha and creme de cassis with a touch of smoke and pencil lead leading to a richly flavored palate of currant, plum, cherry and blackberry fruits with bitter chocolate, licorice, vanilla and cedar notes, and as the air gets into the wine there is subtle sage, tobacco and cinnamon as well, but the black fruits lead the way and linger nicely on the finish. The 2010 Stewart Cabernet Sauvignon is a pure and polished example and highly enjoyable wine, it would be a savvy choice in the luxury arena that Napa Cabernet has become.
($65 Est.) 94 Points, grapelive