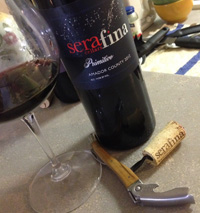 2012 Sera Fina, Primitivo, Amador County.
The Amador County and the Sierra Foothills are finally getting the respect they deserve, and while there are a lot old vines and interesting sites it still remains a mostly undiscovered region in California. Paul Scotto, who comes from a long heritage of winegrowers, wine sellers and winemakers as well as being the director of winemaking for his family’s large company, does his own personal small production label Sera Fina, and if that wasn’t enough he also oversees the newest project, making fine ciders under the Cider Brothers label. There’s even an apple cider & Pinot Grigio blend, these are craft ciders that appeal to new cider drinkers and wine people, they are fresh and easy going with a hint of sweetness. Back to Paul’s own project Sera Fina Cellars wines, after UC Davis and work for a top Pinot Noir house, as well as crafting a huge selection of wines for the Scotto Cellars, he started his dream winery in the Sierra Foothills in Amador County near Drytown. The 2012 Sera Fina Primitivo is rich, opulent and very chocolatey with a loaded palate of blueberry, deep raspberry, plum and blackberry pie filling along with hints of peppercorn, mocha, anise & vanilla, and delivers a full bodied experience, but with soft and round tannins, just enough acidity and finishes with a touch of sweetness. Best to enjoy this young and it’s bold decadence matches well with BBQ. Sera Fina’s Zin aka Primitivo, named such for the Italian heritage tastes like it may have some Petite Sirah in the blend and it’s a very dark colored wine that will certainly appeal to ZAP loyalists and lovers of the more potent style, though at 14.5% it is not a monster, it is solid offering and more interesting than some much more expensive wines in this category.
($25 Est.) 87-89 Points, grapelive