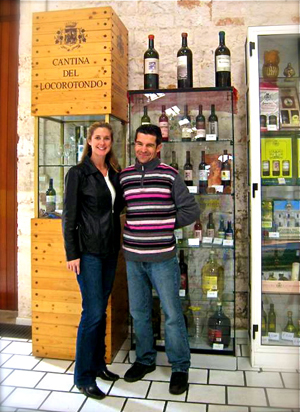 Early Friday morning, my friends and I drove to the nearby sports and recreation area owned by the US Navy to meet a tour bus that would take us for a weekend wine tasting in Puglia.  I learned to play golf many years ago at this recreation area known as Carney Park, and always loved it because it is literally on the floor of an ancient volcano crater.  From the park you look up in any direction and see the tree and grapevine-covered walls of the crater rising up to the sky.  Once on the bus, and on the road to pick up more passengers, I sighed a huge sigh of relief at the notion that I did not have to DRIVE!  We were in a luxurious tour bus and Vito, our competent driver whom I remember from many years ago, was at the wheel.  We picked up our guide, Barbara and the other passengers and were on our way down the beautiful A16 highway heading east and around the back side of Mt. Vesuvius.  Speaking of this route, I keep hearing about the restaurant in San Francisco, “A16” and its fabulous Campania dishes and wine selection, and have put that on my list of things to do when I return.

After about four hours of head-bobbing sleep on the bus, we arrived in Locorotondo, a whitewashed hilltop town formed of concentric circles, each reflecting a later time period of building and progress, surrounding its ancient 12th century center.  We headed to Cantina del Locorotondo, a “cantina sociale,” or co-op winery founded in 1930 by a group of grape growers.  (www.locorotondodoc.com)  Our guide, Mastro Oronzo told us that today, the coop has over 700 members and in 1969 was given the DOC denomination of “Locorotondo.”  After touring this massive winery, with huge underground facilities for the fermentation tanks, we sat down in a nicely presented tasting area and were immediately offered plate after plate of tasty, simple appetizers.  Mastro started pouring and describing the wines and the first one, fruity and a bit frizzante was a hit with many in the group.   The second white was the 2007 Talinajo, from Verdeca, Bianco d’Alessano and Fiano grapes, which I liked for its complexity and a nice balance of acid and fruit-herb flavor.   I was given a bottle of the 2008 to bring home with me and thoroughly enjoyed it one evening with my friend when she made pasta with cooked spinach and cherry tomatos.  Nibbling on Pugliese “panzerotti”, or mini fried pizza turnovers, we moved on to the reds, like Nero di Troia, a grape I had never tasted, and the overwhelming favorite, the Terre di Don Peppe primitivo, which is a grape akin to our Zinfandel.  After the tasting, the group lined up to purchase bottles of their favorites, and some even purchasing the bulbous 5litre glass bottles in baskets as souveniers.  Like most wineries, they do not bottle every ounce of wine they make.  Locals come into the winery with their large glass bottles and “fill up” at the tanks just inside.  This is the charm of winemaking and local consumption, and after spending so much time in wine shops looking at all the stunning bottles and labels, there was something also beautiful in the simplicity of this, seeing wine as an integrative and obvious part of every day life. 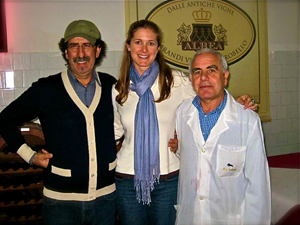 We left the winery glad that the bus had cavernous storage underneath for all the cases of wine, and headed to our hotel in the seaside town of Monopoli.  Yes, there really is a Monopoli, but move over park place, all of their properties are beachfront!  While my friends went to stick their feet in the Adriatic for the first time, I rested before our tour of the town.  Our local guide, Caroline, led us through the narrow and curvy streets past some very different churches, including one with encased mummies that you could see through the windows.  We were welcomed into a neighborhood restaurant which was able to accommodate our large group easily.  Plate after plate arrived and we shared the different tastes with the house wine until late into the night.  Though I am not a stranger to the three-hour dinner, there is always something amazing about sitting down to eat and realizing how much time has gone by…and how many dishes you’ve eaten!  Well, when you’re in good mixed company and the food and wine just keeps coming, it is pretty hard to jump off that train. 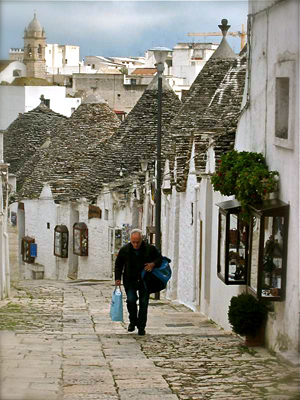 The next day we headed just south to Alberobello and the Cantina Albea (www.albeavini.com) which surprised us with an excellent wine museum on property with beautiful photos and explanations in Italian and English.  A great way to learn about the grapes and wines and culture of Puglia, our guide walked us through the various exhibits in the two-room museum.  We were then treated to a short film about the region of Puglia and its treasures before sitting down at their long tables which had been nicely prepared for our tasting.  Plates of traditional cheeses were passed as the first wines were being poured.  The first wine was their Il Selva DOC Locorotondo Bianco with its characteristic golden straw color and tropical fruit aromas.  This wine paired nicely with the “caccio cavallo” cheese they had passed around, with its firm texture and mild flavor.  The first red was the 2006 IGT Raro Negroamaro and Primitivo blend, with toffee and licorice aromas that gave way to dried cherry flavors.  Gentle tannins made this a nice accompaniment to the selection of salami that were offered.  The 2006 IGT Petranera 100% Primitivo had fresh aromas and taste instead of the more cooked or jammy flavors, which I really liked.  This wine was like chewing a mouthful of ripe black cherries, with the flavors lingering at the finish.  I was particularly interested to read in their brochures that the winemaker of their array of award-winning wines is Riccardo Cotarella, the famous Umbrian enologo, interestingly enough, also the winemaker at Morgante winery in Sicily.  Several of us at the table had opted for the additional tasting of their 2005 IGT “Lui” made from Nero di Troia grapes, and this Gambero Rosso 3-glass-winning wine did not disappoint.  This enjoyable wine left you having to remind yourself that this was a tasting, not a drinking.  This wine is nearly black, not red, with soft aromas of licorice and cherry.  It is soft and full in the mouth, with layered flavors of bitter cherry and spice, perfect for roasted meats and aged cheeses like the manteca affumicata that we were served.  During the tasting my friends were really trying to learn how to pick out the fruity aromas and flavors of the wines and my friend Kirsten was particularly inspired by one of the comments that was offered to us, “red wines, red fruits and white wines, white fruits.”  Our charismatic tour organizer, Natalie, when trying to confidently express what she was tasting had innocently asked one of our hosts if one can really be wrong with what one smells, and he instantly answered, “yes!”  Well, ok, at least we all agreed that the wine was excellent! 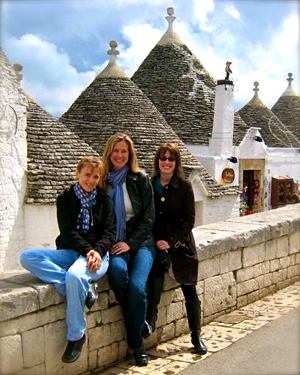 After wiping out the supply of Lui available in the cantina, and thanking our excellent hosts at Albea, we set out for the charming town of Alberobello to see the ancient trulli houses before heading home.  Alberobello is an amazing hilltop town surrounded by olive and almond trees, and because of the amazing conical-shaped trulli houses, it has been declared an International Human Resource by UNESCO.  Trulli are common in the central part of Puglia, and nowhere else, and their history dates back to the middle ages by some accounts:  Because of the structure of taxation on the king’s land, anyone with a permanent home would pay heavily.  Therefore, the people of this area devised a structure based solely on stones readily found in the area, and utilizing a centerstone that would keep the structure intact.  Upon hearing word that the taxman was coming, the contents were removed and that centerstone would be removed, causing the entire structure to crumble into an unrecognizable heap.  When the danger had passed, the homes could be re-assembled.  Hex symbols identify individual Trulli, which, with their whitewashed walls and grey conical stone roofs would normally be difficult to distinguish.  These symbols only add to the magical charm of this town, which is nothing short of a fairytale village.  Like the new tastes discovered in the wines, the flavor twists in their regional dishes and the amazing history of this region, Puglia proved to be a world apart, while only hours away.