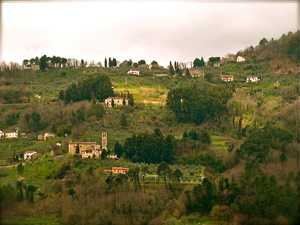 Saturday was a lazy day thanks to the (rainy) weather.  However the Formula 1 qualifying in Australia over breakfast had such exciting results (Though not so happy for Italy’s loved Ferrari team) that we were inspired to brave a Saturday trip to the grocery store down the hill, (similar to a small grocery in the US) for something fun for dinner.  It was packed, so much so that the checkers were even commenting that it must be Christmas Eve or something.  Grocery stores are open Christmas Eve in Italy?  What is the world coming to?

After arriving home, we took the dog for a walk down the windy, narrowly-paved hill, and were further race-inspired by the Ferrari racing flag that was waving to us from the flagpole as we came up the driveway.  But not only the Ferrari flag, but also the Italian and the California flag in my honor, how cool!  I am in Italy, of course, and the home of Ferrari, Modena is just a couple hours away.  It was time to cook dinner and discuss the possible outcome of the race based on the qualifying performances.  We enjoyed a dinner of Grilled herbed chicken with potatoes and asparagus, salad and some goat cheese drizzled with rosemary-infused olive oil (from their own grove of 150-year-old trees) This all went beautifully with a wine my hosts had never tried, but one of my favorites for light meals, Bardolino.  We opened a 2007 Bardolino from Guerrieri Rizzardi, a winery near Lake Garda I had visited about 4 years ago while enjoying the drive between Milan and Verona. It was very light in color, and had enticing aromas of sour cherries, dried apricots, and savory herbs. The first taste was slightly effervescent, but it blended nicely with the herbed chicken and potatoes, though we wondered if it was really too fruit-forward to be taken seriously.  The pleasant surprise came when pairing it with the rosemary olive oil-soaked goat cheese, which really brought out the savory flavors of the wine, rather than the ripe fruit, and altogether negated any acidity we tasted previously.  This combination particularly surprised and impressed my gracious hosts, which for me was validation for why I like to keep trying new wines and new pairings.  We all learned something new and had fun in the process.  I am almost embarrassed to admit what I paid for the wine but since it is from a reputable winery I will, E4.50 or $6.00

Sunday morning at 7:15am we were all piled in the couches, including the dog, to watch the first race of the Formula 1 season from Australia.  There is nothing like watching the races live, and the summertime weather in Australia looked gorgeous.  Personally, it was one of the happiest races I have ever seen because a brand-new team (though made up of veteran racers and engineers) managed to finish 1 and 2!  For the first time in 55 years, they said, a rookie team won the first race of the season, congratulations to Brawn GP and their sponsor, Virgin Airlines.  “Does everything Richard Branson touch turn to gold?” asked my host.  Well, he sure seemed happy and what a great thing for this team if that is true, especially because my favorite driver, Jenson Button won, something he hasn’t been able to do in a while.  But what about the BUBBLY?  In Formula 1, the champagne sprayed by all podium finishers is Mumm’s Cordon Rouge.  The team owner of the winning cars was also on the stand, and quickly used his new shield-shaped trophy to deflect the heavy spray coming from his drivers’ two magnums of Mumm’s. Hopefully the presenting authorities didn’t take offense, and saw the positive:  It was an effective tool, how many trophies can boast that?  I should mention the third place driver, also someone who has struggled to make it to the podium during the last few years, Italian, Jarno Trulli.  I mention him not only because he is Italian, but also because he is a partner in a winery in the south of Italy, called Podere Castorani. I checked out the website http://www.poderecastorani.it today when we went to a friend’s house to get online for a few minutes, and I look forward to tasting their wines at Vinitaly this week.  These American friends down the road were nice enough to enhance our Internet experience with a tall glass of prosecco, as it was “close enough” to 5 o’clock – thanks to the time change last night! Which reminds me, if any of you are searching for an excuse to enjoy a mimosa or Bloody Mary some weekend morning, just remember, we’re 9 hours ahead here, so we’re your “it’s 5 o’clock somewhere” for the 8am thirsties.