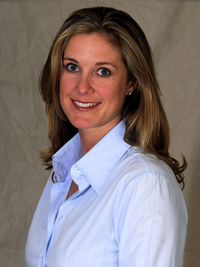 If I were 8 today instead of..However old I am (don’t ask).. The theme for my birthday party would be Barbie, like “Fantasy Birthday Barbie” of yester-year, as opposed to “Way-Too-Cool Tattooed Barbie” of today who, frankly, scares me.  No, today’s color was pink which meant pink “buon compleanno” (happy birthday) balloons greeting me at the front door of my friends’ house, pink roses that we bought at the market and of course delightfully tinted pink Brut Rose champagne by Pommery in a shiny metallic pink case!  Barbie’s got nothing on me today simply because she’s too young to enjoy this champagne! (Plus, that Ferrari just won’t fit on these tiny roads, and I’d never get out of first gear..)

We started the day with my first real cappuccino since my arrival, at my hosts’ favorite bar.  “Bar” here describes any place to get an espresso, which usually has fresh pastries and an assortment of liquors in case one needs a “Caffe Corretto” (corrected with liquor) to stay motivated.  I really do love this place!  My friend and I looked over the “birthday pink”-colored sports section which was mostly dedicated to the Formula 1 race the previous day, and were unhappy to see that the Italian 3rd place finisher was penalized and stripped of his podium finish and points.  Too bad our reading proficiency didn’t allow us to completely understand the reason; this would require some Internet research and likely a call to my dad later for the scoop.

We headed out to the first grocery store, a French chain called Carrefour which carries everything from socks to electronics to cheese that smells like socks.  Don’t make the mistake of mentally comparing this to a Super Wal-Mart, it’s more like Whole Foods and a little mall all rolled into one.   They have a lovely selection of wines and champagnes and while we were trying to choose between bubblies, the pink metal bottle-shaped can housing Pommery Brut Rose caught my eye.  I’m not normally a fan of rose champagne in general, but I recalled trying Laurent Perrier Brut Rose at a Rancho Cellars tasting many years ago and loved it (and it wasn’t just because it was Pete Sampras’ favorite…really. ) 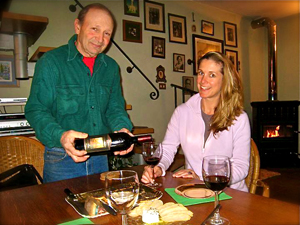 We stopped at the favorite workman’s lunch, Pinzo’s for a quick plate of Lasagna to warm us up, then headed up the hill to the house.  While taking the dog for a walk, I dilly-dallied, trying to find a 4-leaf clover to celebrate my birthday amongst the 4 or 5 different kinds of clover that grow there.  I was determined because I knew I’d be talking to my best friend later and this was one of our shared childhood passions.  At the entrance to their olive grove, I finally found one, all leaves the same size, so good for at least a year of good luck!  When we got up to the house, the sun was finally shining and we decided to sit outside for 5 o’clock cocktail hour.  The California state flag on the yardarm and the country music blasting from the outside speaker was a signal (to everyone on the hill) that the party had started.  We opened the Pommery Brut Rose and immediately liked the platinum-pink color and the streaming columns of tiny bubbles.  The aroma was minerally, which I love, and fresh, and the first taste was flavorful and crisp, much different than the various fuller-bodied proseccos that we had consumed in the past days.  I tasted pineapple in addition to the currant / dark berry, and found that a refreshing change. 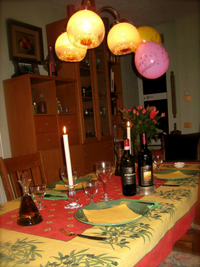 So much for eating early, we went inside when it started getting dark to prepare dinner and appetizers.   For the 2000 Banfi Brunello di Montalcino that was currently breathing heavily, we set out the goat and sheep cheeses (substituting for Humboldt Fog, a delicious pairing for Brunello) and I made my truffle, mushroom, and black olive bruschetta.  By the way, it must be noted that you can’t buy Portobello mushrooms at the local grocery store here!  The first glass of Brunello was amazing, the color was bright ruby to garnet, and the lighter aroma of cherry gave way to intense aromas of licorice and earthy mushroom. The wine’s layered flavors, when combined with the bruschetta’s mellow truffle flavor became something new altogether: savory, rich and absent of tannins, which is something I notice in this wine more than others.  The tanginess of the pecorino sardo gave an altogether different flavor and we noticed the long, flavorful finish this time.  The aged chevre goat cheese turned out to be a fair substitute for Humboldt fog, and again mellowed the intensity of the acid and red fruit flavors, but amplified the earth- and spiciness.

We decided to switch to the 2005 Avignonese Vino Nobile di Montepulciano for comparison with the appetizers, but it was not met with as much enthusiasm from my hosts, though I do love it’s forest-floor earthiness.  For all of you wincing out there, I admit it was an unfair comparison after the Brunello, though I couldn’t help it, I’m still learning.  Its color was more clear ruby than garnet, and the most noticeable aromas were cooked or dried fruit and savory herbs.  On its own, the smoky, black cherry flavor was more heavy than bright, but was enjoyable with the aged goat cheese with some spiced fig jam.  The salt and tanginess of the pecorino was the best combination though. 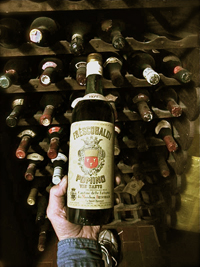 The Brunello shined as the perfect accompaniment to the Bisteca Fiorentina, that heavenly Tuscan steak, prepared in traditional style with only pepper and salt and olive oil as seasoning and served with chopped lettuces on top. The smashed whole potatoes had also been lightly brushed with truffle oil before grilling, and again were delicious with the Brunello.  We finished with some store-bought but very fresh pastries like cream puffs and fruit tart, which we enjoyed with the last of the Pommery Rose.  Too bad we had already consumed enough, because that dusty 1971 Frescobaldi Vin Santo that I had seen earlier in the garage racks would have been calling me at this point.  (I hope to have tasting notes on that one before I leave, hint, hint…) By this time it was 10:30, and though we typically pooh-pooh the late dinners in Italy, we had no excuse as we did the cooking!  Unfortunately, there was no time for card playing, since it would be an early morning to get to the train station to head to Verona.

We took the dishes to the general vicinity of the sink and just before heading upstairs to go to bed…somehow got into a juggling competition.  Sure, that’s totally illogical, but it was also strangely compelling.  Plus it was Barbie FANTASY Birthday, and I was sure I could juggle at this point with the 4-leaf clover at my side.  Not giving in to birthday privilege, Orlando out-juggled me, but I DID manage to drive the dog crazy in the process while Mary armed herself with the camera.  Was this our litmus test to be sure we didn’t overindulge, or simply a result of overindulgence?  We may never know or care…but I do know that, wine or no wine, I’m not a very good juggler… but at least I didn’t knock anything off the walls…