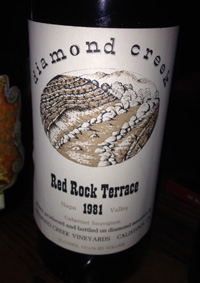 1981 Diamond Creek, Cabernet Sauvignon, Red Rock Terrace, Napa Valley.
Diamond Creek might be Napa first cult single vineyard wine and are wines that seem to age forever without dying, these are the Dorian Grey of California wines! I have been a longtime admirer of Diamond Creek and I am grateful to have met the late Al Brounstein on a few occasions and his wife Boots, and was graced with a wonderful conversation and inspiration, Al was a great person and a visionary, starting his winery near Calistoga on Diamond Mountain back in 1968, and it is a piece of history that sometimes we get lucky enough to taste! I last saw Al and Boots in 2002 at a Cabernet Sauvignon tasting in Napa at the Greystone, and while very much affected by Parkinson’s decease, Al was gracious and warm, I’ll not forget that, and his kindness in chatting to me, and for having Phil Steinschreiber is winemaker pour me barrel samples of his 2001 Cabernets. Over the years I’ve picked up a few bottles of Diamond Creek, these have all been glorious, especially 1985 and 1987, along with 1990 and 1992, but also I’ve been at tasting that had early 1970’s and they were fantastic as well. Getting to the 1981 Red Rock Terrace, I must thank my friend Fred Daniels, it was his bottle we savored over a evening recently at Sens Restaurant in San Francisco, which happens to have a nice selection of Diamond Creek on their list, at remarkably fair prices I might add. I have in the past favored Gravelly Meadow from Diamond Creek, though each of the four single crus (vineyards) Red Rock Terrace, Volcanic Hill, Gravelly Meadow and the legendary Lake Vineyard, which is only done in the greatest of vintages, are grand wines. The 1981 Diamond Creek Red Rock Terrace, which we single decanted, started with violets, graphite, a hint of earth and lots of black and blue fruits, this Cabernet has a very Bordeaux like personality and is not too far off Latour or Montrose from a good year, the palate slightly hints at full maturity, but the color is solidly holding to deep garnet and ruby with a black core, this very much impressed me and the texture, layers and detail are all stunning, there’s currant, smoke, blackberry, plum and cherry along with mineral tones, dried flowers, a touch of game and cedar notes. with air the tannins melt away and turn sweet and succulent and hints of tobacco leaf, licorice and subtle vanillin emerge.The 1981 Red Rock Terrace is fabulous and I might say peaking now, it could go a few more years, but I doubt there is much to be gained by waiting in this medium/full bodied California classic. This was a great experience, again lots of thanks to Fred Daniels for bringing this wine out of his cellar and to Peter Steiner, a longtime friend, and wine director at Sens for making it all happen. You can still find Diamond Creek, both young and old at many wine merchants, and there are many good bottles to be had, even on Wine Bid where these older vintages go for reasonable prices.
($100-300 Est.) 97+ Points, grapelive