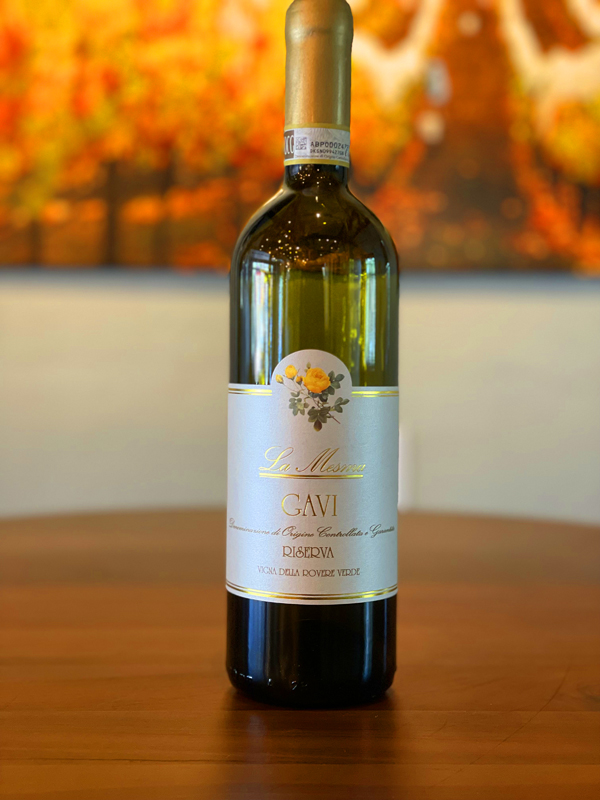 2017 La Mesma, Gavi Riserva DOCG, Vigna Della Rovere Verde, Piedmonte, Italy.
I don’t know about you, but this was the first time I’ve seen and tasted a Gavi Riserva and it was incredible, with mineral driven intensity and even with its age it was filled with electric vibrancy and clarity of form with bright citrus beaming throughout, but also showing enough leesy roundness to have an almost white Burgundy like presence in the glass, this La Mesma is very tasty stuff. This La Mesma, who’s cellar is in the small Piedmonte local of Tassarolo, 2017 Gavi Riserva, 100% Cortese, made by winemaker Massimo Azzolini, is a rare single vineyard wine that saw hand harvested grapes and was vinified in cement tanks with a temperature controlled fermentation, then raised for one year in the cement and then another six months in the bottle before release, following the DOCG rules to qualify for a Riserva. This vintage, which was a warm one, shows loads of lemony character along with hints of muskmelon, white peach and zesty kumquat, as well as wet stones, an herbaceous note, verbena and green almonds in a golden and straw colored medium bodied white. The Azienda Agricola La Mesma, that was founded in 2003, is an organic certified winery following strict organic and holistic practices, they are faithful stewards of their land and promote biodiversity to grow better grapes, as this lovely wine clearly proves is the right way to farm. A leader in the Slow Wine movement, La Mesma’s Gavi wines have been recognized as some of the top sustainable wines in Italy and they are committed to the best environmental practices, including going as green as possible, even adding solar panels to reduce their carbon footprint, as well as trying to be socially conscious by hiring and training displaced peoples, that had to flee war zones.

The La Mesma winery is a small family run business being owned and managed by three sisters, Paola, Francesca, and Anna Rosina that have turned a small plot of land into a very noteworthy estate making precise and soulful wines. Their importer Tanaro River were impressed by the quality of the wines here and note Paola and her two sisters were raised in the city of Genoa on the Ligurian coast, without any viticulture background, but that didn’t stop them from making a success of their project. The Rosina sisters’ journey to producing Gavi wines began about 20 years ago when they decided to turn their family country house, which is nestled in the peaceful hills on the border between Piemonte and Liguria into a tiny self contained estate winery. La Mesma, introduced to me by my Italian Sommelier friend Giuseppi Cossu, is located in famous the Piemonte region noted for little and zingy white wines made from the native Cortese grape. It was, as they explain, their mother that suggested to the sisters, that they plant a small vineyard here, thinking they could just make wine for family and friends. So what originally started out as a hobby vineyard would blossom into a viable, successful business with outstanding quality well beyond their imagination! While not born into a family of winegrowers, the Rosina sisters used their individual professional talents to good effect and their passion and hardworking or grit has served them well, creating winery that is now the pride of the region. The Rosina’s La Mesma is also the only producer to make the full range of Gavi wines adhering to the DOCG rules, including a still Gavi, Gavi Frizzante, Gavi Spumante Traditional Method and this Gavi Riserva. This wine, traditionally packaged, but with a gold wax capsule, still has plenty of life is an intriguing example of this region’s most acclaimed varietal, is well worth chasing down. This wine has whet my appetite for Gavi, a wine that is wonderfully refreshing with racy acidity, perfect for light Summer cuisine.
($25 Est.) 93 Points, grapelive