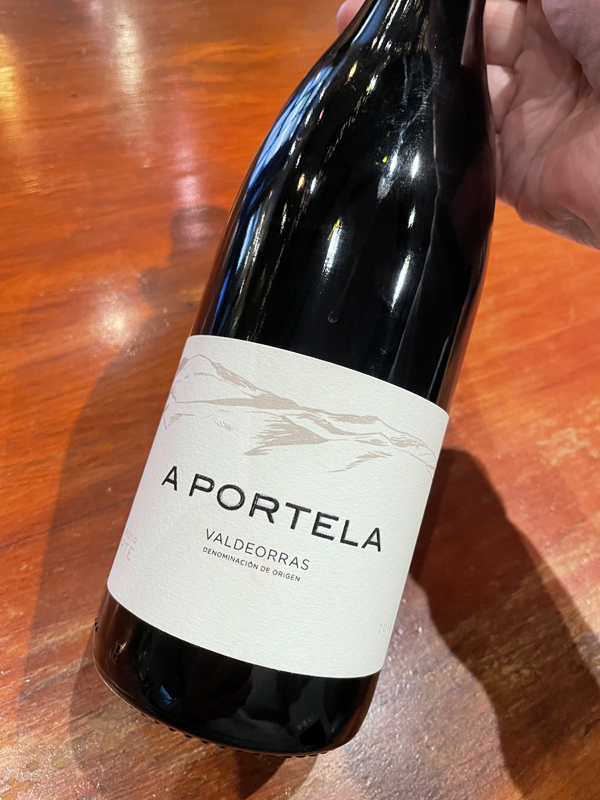 2015 Alberto Orte, Mencia “A Portela” Valdeorras D.O., Galicia, Spain.
Orte’s 2015 A Portela Mencia is getting pretty mature at this stage with some secondary tertiary elements coming through and folding of savory tones over the fruit, but it is still a very fine example of grape and place with racy acidity and mineral notes firmly in view here along with red currant, cranberry, black cherry and brambly spiced raspberry fruits along with dried flowers, wild herbs and subtle earthiness, making for a tasty effort. This wine comes from a single parcel in the Valdeorras zone, which is warmer than its neighbors to the west, Ribeira Sacra especially, being separated from the cold and wet Atlantic climate by a range of mountains and set on granite based soils. This region is noted for great Mencia reds and Godello whites, it is a unique terroir that is cooler than the Bierzo, which is just to the east, where the vines get a more Continental climate with warmer conditions that makes for more ripe flavors and concentration, though this one from Orte isn’t lacking for anything and a great value.

The winemaker Alberto Orte, as mentioned, produces his A Portela from a single vineyard, planted to high elevation, which has slate and granite soils, all of which makes for more flinty mineral in this Mencia based wine. This wine was crafted from 100% Mencia, from vines that were planted between 1976 and 1990, which are sustainable hand tended on a steep slope that rises up to almost 2,700 feet above sea level, which allows for the vibrant acidity. This wine is crafted from de-stemmed grapes with a week long cold soak before a 10 day maceration and fermentation in stainless steel vats, after going dry the wine is then racked off the heavy lees into stainless again for 12 months and then aged a further 8 months in used French oak barrels. Valdeorras kind of gets overlooked in Galicia, but these are serious and delicious wines which I really enjoy, so I was very happy to discover this A Portela and look forward to trying a more fresh vintage, as this 2015 started to fade just a bit after 20 minutes in the glass, even though it was still pleasing, especially with food. This bottling was done in a collaboration with the importer Olé Imports and is part of collection of wines under a series called Olé & Obrigado, that is promoting small growers in Spain and Portugal.
($24 Est.) 89 Points, grapelive