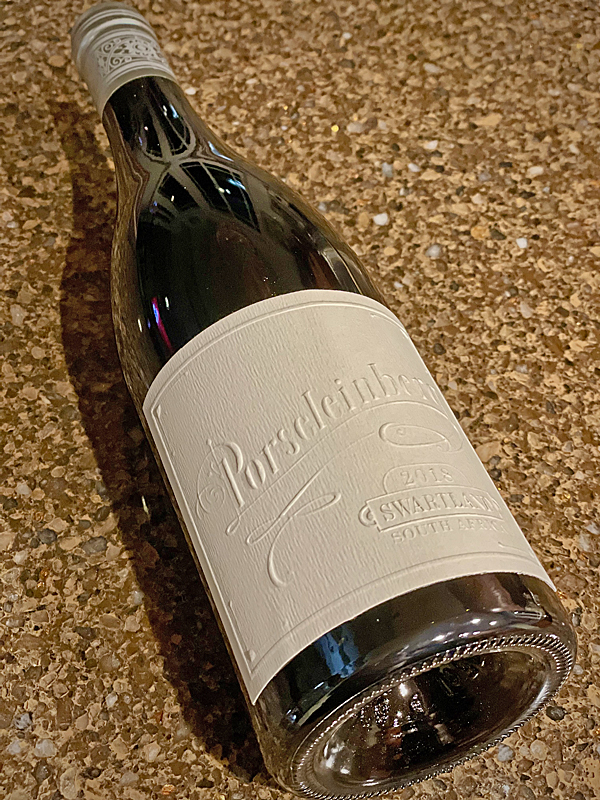 2018 Porseleinberg Farm 798, Syrah, Riebeek Kasteel, Swartland, South Africa.
This little known Porseleinberg wine by winemaker Callie Louw, part of the Boekenhoutskloof collection is an absolutely stunning Syrah, I can honestly it is one of the best versions in this style I’ve ever had, seriously rivaling Thierry Alemand’s famed Cornas and or Domaine Jamet’s iconic Cote-Rotie! This awesome full whole cluster Syrah from South Africa’s Swartland region bursts from the glass with a tantalizing mix of savory meatiness and utterly perfumed violets and an array of dark fruits that all leads to a full bodied and youthfully taut palate with layers of boysenberry, blueberry, damson plum and dusty black cherry fruits that are perfectly accented by an echoing of violets, anise, Greek black olive tapenade, lavender, cinnamon, garden herbs and rich creme de cassis. This wine starts slow, but really hits the gas when fully open, a few swirls and time turns this chiseled Syrah into one of the most fascinating experiences you’ll ever have and is a monumental effort, proving again that Syrah is a world class varietal that produces some of the greatest wines and values in the wine world, this wine is as pleasing and as complex as anything from Bordeaux or Burgundy and has intense palate impact. This is a special wine, it is without question an exciting discovery and one of the best South African examples of Syrah I have tried and joins an elite set of labels here, like Sadie Family and Badenhorst, if you can find it, don’t miss a chance to get it.

Started in 2010, this Porseleinberg (Syrah) project, has become one of the Cape’s most exciting reds, which after tasting this vintage, I can see why and from what I hear this 2018 is a more finessed edition than prior offerings that have been described as monsters or tannic powerhouses. It’s been said that Callie Louw has been very Influenced by some time spent at the mentioned Domaine Jamet in Cote Rotie and the employment, as noted by the winery, of a submerged cap maceration during primary fermentation. In a traditional nod, this 2018 Porseleinberg was 100% whole-cluster fermented in concrete vats using native yeasts, making for an old school style Syrah that excites the senses with a world of spices, camphor, mineral notes with raw peppercorns, snappy cloves, rosemary that never takes away from the deep blue fruits and depth of flavors. Porseleinberg started when South African Marc Kent (Boekenhoutskloof) searched out a unique site for Rhône grapes, which led him to the Swartland, where top Cape wines have been gaining notoriety. He believed he found the perfect place and purchased this small wine farm atop the Porseleinberg mountain and put the talented Callie Louw to work, with unbelievable results now in the bottle. Grown on this area’s schist soils, this Porseleinberg Syrah saw a maturation or elevage in a combination of mainly large and seasoned foudres and concrete eggs, this ended up contributing to the fantastic purity and fabulous concentration here. I can imagine this rare bottle aging for decades with your patience being well rewarded, though I don’t think I’d have the will power to wait!
($90 Est.) 98 Points, grapelive