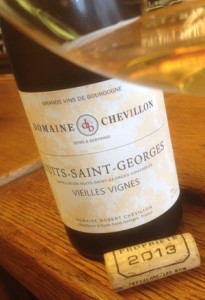 2013 Domaine Robert Chevillon, Nuits-Saint-Georges Blanc, Vieilles Vignes, White Burgundy, France.
The rare Chevillon NSG Pinot Blanc, made from white berried Pinot Noir vines, in my words an “albino Pinot Noir” which naturally mutated from the red to the white spontaneously in the Nuits Saint Georges vines of Henri Gouges as far back in 1936 and were later grafted over to selected plots at Chevillon intermixed with the Pinot Noir, including the Premier Cru site Les Chaignots. One of the few White Burgundies that is not Chardonnay, the Chevillon Pinot Blanc or Pinot Gouges as it was originally called is finer in rich detail than Aligote, but more vibrant and lighter than Chardonnay with it’s own glorious unique personality. I’ve have the Henri Gouges version a few times, starting with the 2000 vintage and this Chevillon 2013 takes it to another level, this is a thrilling white, and though pricy and not a wine to rival Puligny or Chassagne in most cases, it is rare and exciting to drink. The 2013 Chevillon Nuits-Saint-Georges Blanc old vines starts with a hint of French oak, a touch of toast, but nice white flowers, cool melon and mineral tones take over quickly with a medium palate of lemon/lime, white peach, green apple and kiwi fruits leading the way along with wet gravel, steely tones, bright acidity, saline and light dusting of minty herbs and vanilla. In the deep background you get the impression of creamy textures to come over time and you can see a fig and butterscotch layer to found in the future given time in the bottle. I must say this was super impressive right out of the bottle, no question it can be enjoyed right now, though most fans of this wine like to see the development unfolded and age them 3 to 5 years, though I kind of like the vigor and vitality of it’s youth, it is not an easy wine to locate, but very entertaining and a beautiful effort.
($80 Est.) 93 Points, grapelive