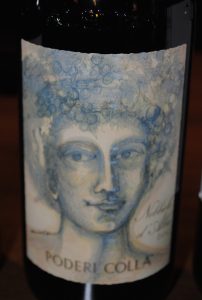 2014 Poderi Colla, Nebbiolo d’ Alba, Piedmonte, Italy.
Bright and vibrantly fresh, the Poderi Colla Nebbiolo d’ Alba is a old school wine wine that shows earthy spices and vintage lightness, but with stylish form and nice layering. A new producer to me, imported by The Source, Poderi Colla does some wonderful and gripping higher end small production wines from Barolo and Barbaresco Crus, with the 2012 Roncaglie Barbaresco maybe showing the best of the lineup, but I still was drawn to this baby Barolo, especially for the price, this is an artisan winery to put on your radar. 2014 was a difficult and light vintage for Piedmonte and it took a special gift to make better than ordinary or lackluster wines, so I was impressed with Poderi Colla’s Nebbiolo d’ Alba, and even though yes it doesn’t have the depth or body of 2010 through 2013 vintages would have, there is a lot to like in this ruby/orange hued red with it’s mix of rose petal, fennel and amaro herbal notes that leads to a light/medium palate of plum, cranberry, minty/red currant and brandied cherries with a hint of grilled orange, mineral and porcini. Best to enjoy this vintage early and with food, it gains a bit with air and while tangy and the acidity strong, it lingers with pretty floral tones, iron and dusty raspberry. I bet the 2015 version will be a huge thrill with a riper warm year, though this 2014 should prove very enjoyable for a few years and makes for a good choice for restaurant lists.
($30 Est.) 91 Points, grapelive