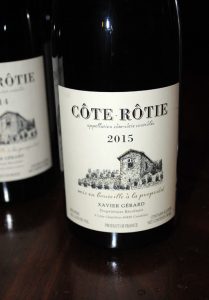 2015 Domaine Xavier Gerard, Côte-Rôtie, Northern Rhone, France.
A wonderfully expressive and exciting Côte-Rôtie from new to me Xavier Gerard, who I met earlier this spring and tasted through his beautiful lineup of Viognier (Condrieu) and Syrah (Côte-Rôtie) wines, he is a young winemaker that is making an impression in this classic Northern Rhone region, he uses traditional methods and makes wines that sing with perfume and delicacy. Xavier, who recently took over the family business, has a quiet, but passionate personality and the estate accesses impressive holdings in Condrieu and Côte-Rôtie, a majority of which are under estate ownership that allows a greater control of the vines and results are thrilling. He told me that their steep, craggy slopes, set on almost pure granite, demand that all the vineyard work be done manually, even tougher for the 6 foot 4 ish Gerard, it must be almost backbreaking, and he continues the old school practices in the cellar, with spontaneous (native yeast) fermentations and classic Northern Rhone elevage, mostly in used barrels, mainly demi-muids. His Condrieu, I tried both 2014 and 2015, plus the special 2015 and 2016 lieu-dit “Châtillon” versions all of which were absolutely gorgeous, these were not to miss whites for Viognier lovers, though I must say I couldn’t take my mind of his Côte-Rôtie, with the robust 2013, the lighter 2014 and this 2015, that shows the vintage’s concentration to perfection, again Northern Rhone Syrah fans had better check this guy out before the word gets around and the price goes up, they are sensational wines. The 2015 Côte-Rôtie, sourced mostly from the Mollard lieu-dit about 65% with the remaining balance coming off parcels in the Crus of Font-Jean, Viallière, and the world famous La Landonne! Gerard also does a single Cru La Landonne, though sadly I didn’t get to try it, though that being the case, I was not disappointed at all as the regular Côte-Rôtie is magnificent, not as rustic as Levet, it reminds me a bit of Rostaing if not even better. Gerard uses partial whole cluster, probably more than usual in this richer 2015, it shows a heroic sense of purity and has a heady violet laced perfume with subtle hints of wood, earth, spice and black fruits. The palate is still firmly tannic, but very drinkable even still, and with air this medium/full bodied Syrah fills out and the mouth feel is excellent with layers of boysenberry, damson plum, blueberry compote, black currants and sweet kirsch notes along with graphite, peppercorns, anise, powdered floral incense, flinty stones, earth and a whiff of cedar. This is spot on, watch out Jamet, there’s a new sherif in town, drink Xavier’s 2014 now, but be sure to get this 2015 to put away, it looks to have serious cellar potential, this and his Côte Châtillon Condrieu are mind-blowing Rhones, imported by Rosenthal, this is a guy to watch.
($69 Est.) 96 Points, grapelive