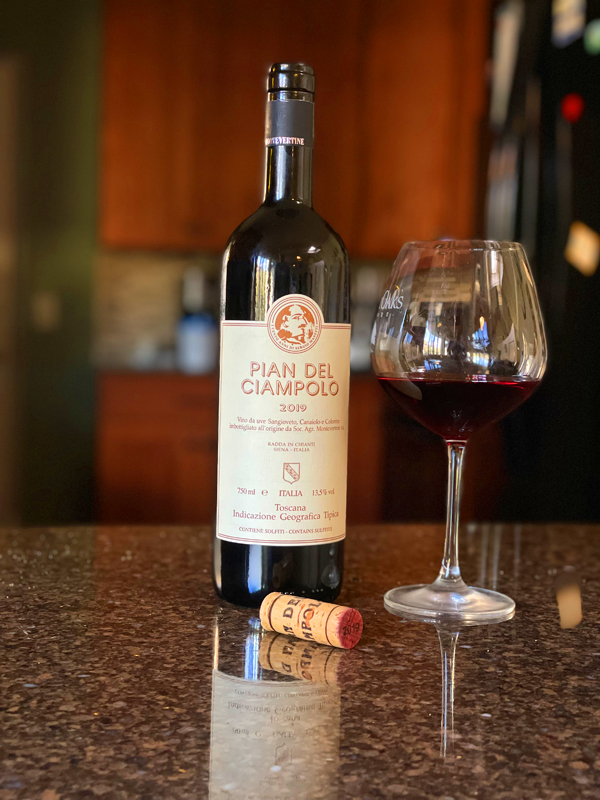 2019 Montevertine, Pian del Ciampolo, IGT Toscana Rosso, Radda in Chianti, Tuscany, Italy.
The beautifully pure and dark garnet Montevertine Pian del Ciampolo 2019 really shows off the vintage with depth, complexity and energy, it is made from 90% Sangiovese along with small parts of Canaiolo and Colorino, that are classic old varietals in the Chianti Classico zone and adds to this wine’s distinction. This Pian del Ciampolo is richly flavored and nicely structured with ripe flavors and good natural acidity delivering the best in Sangiovese’s personality from start to finish. The medium/full palate flows transparently across the palate with mulberry, red currant, blackberry, plum and cherry fruits that are wonderfully accented by lightly earthy elements, loam, spice and savory notes, plus cut tobacco leaf, cedar, anise and hints incense and dried herbs. The nose, which is sultry, with balsamic and delicate floral notes, comes on with air and the Pian del Ciampolo gets better and better with each sip and really turns on the charm with robust cuisine adding an extra dimension with food, as Sangiovese is known to do. The Montevertine Pian del Ciampolo IGT Toscana Rosso, is as mentioned, composed of mainly Sangiovese (all organic) with tiny amounts of the Canaiolo and Colorino, is the basic or main red wine of the estate. The Pian del Ciampolo, which is 100% de-stemmed, was fermented with native yeasts and in concrete vats, with a long maceration and pump overs for full extraction, before seeing a gentle pressing in a vertical basket press and then It sees 18 months of aging in large casks which are neutral Slovenian oak botti. As per normal here at Montevertine the Pian del Ciampolo was bottled unfined and unfiltered to allow for raw nuances to shine in this pure terroir driven wine.

It’s a new era at this famous winery, with a generational shift at the Montevertine estate with the passing of their visionary founder Sergio Manetti, who bought this property back in 1967, as well as long time and influential winemaker Giulio Gambelli, a fierce proponent of the Sangiovese grape, and most recently Bruno Bini, the highly regarded cellarmaster. Now Sergio’s son Martino Manetti is the keeper of the faith here and running Montevertine and it looks like this iconic label is in good hands, as I have seen nothing but exceptional wines in recent years, as this 2019 Pian del Ciampolo shows. Martino has Paolo Salvi, Gambelli’s protégée, at his side and making the current wines, both of whom, as Montevertine’s importer Neal Rosenthal says, remain dedicated to the style and philosophy of their forebears. The late Sergio Manetti was always a rebel and never followed fashion, especially when it came to playing by the rules of the Chianti Classico zone, which were lets say, not always in keeping with tradition and until recently promoted a modern international style and featured non native varietals in the blend, something that Sergio couldn’t abide by, so he decided not to label his wines with the famous black rooster or as Chianti Classico wines. The Montevertine estate above Radda, at an elevation of 425 meters, has 18 hectares of vineyards with 90% of which are planted to the Sangiovese grape, known as Sangioveto here, along with small parcels of Colorino and Canaiolo, lesser known native Chianti grapes. The hillside vineyards here are divided into nine separate parcels with the oldest vines, which were planted in the Pergole Torte vineyard back in 1968 go into the winery’s signature Le Pergole Torte, a 100% Sangiovese, that has become a legendary wine, on par with First Growths and Grand Cru Burgundies. If you are looking for exceptional soulful wines then Montevertine is without question a winery for you, with this one being a great starting place to get to known Montevertine.
($35 Est.) 93 Points, grapelive