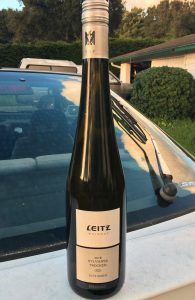 2016 Weingut Leitz, Sylvaner Trocken, Alte Reben, Rheingau Germany.
The mineral driven and richly flavored Leitz old vine Sylvaner is a brilliant white wine, coming off the famed Drachenstein (Dragon Stone) Premier Cru (Erste Lage) vineyard, which sits above part of the Grand Cru sites of Rudesheimer Berg in the Johannisberg zone of the Rheingau, and set on a vein of quartzite along with broken slate. This is wine that speaks first and foremost of place with a cooly crisp yellow peach highlight, which is also present in the Rieslings from here, it’s a wonderfully dry and textured offering from Johannes Leitz and his team. Fermented and aged in large neutral cask, the Leitz Drachenstein Alte Reben Sylvaner is labeled a Trocken QbA, but feels much more regal and profound in the glass, more like some the modern Feinherb offerings that have medium weight profiles and textural grace without showing much in the way of residual sugar, this is a vibrant and brisk wine that gains with air in the glass, it’s pale golden hue is beautiful and it’s details delicate and rounded, while still showing the vigor and sense of purpose you find in all of Leitz’s wines. Sylvaner (Silvaner, Gruner Silvaner or locally to Rudesheim Johannisberger) looks to have originally come from eastern Austria, it has been DNA revealed that is was a crossing between Traminer and Hunnic (a lesser local varietal of Austrian origins) and while still in parts of Austria it has found a more successful home in Alsace, France, though it must be said Sylvaner was and is great in and around Baden where it can be found in Grosses Gewachs bottlings! It became very popular in Germany post WWII when it had a total of 30% of all vineyard area, but used for cheap fruity bland wines for mass production Liebfraumilch, though then got almost all ripped out, and now is making a small come back. It needs special vineyards and intense care to make wines of character and class, and here Leitz succeeds in a big way with this Sylvaner, it comes in at 11.0% natural alcohol and has a brisk dry palate with a nice saline quality showing 2016 inner brightness and freshness along with solid ripe flavors which includes green apple, stone fruit, lemon and melon fruits along with a touch of subtle creaminess (leesy?), plus hints of flinty shale, citrus blossom, wet stones, tangy kumquat sorbet, briny notes and with a core of crystalline steeliness. Less intense than Riesling with a less expressive nature and softer aromas, this Sylvaner holds it’s own in Leitz’s great set of 2016 wines, I was wonderful impressed with this Drachenstein Old Vine Sylvaner, it’s a wine that is brand new to me, and it’s a serious steal at the price! I really enjoyed it with lighter Asian cuisine and a mild curry dish, but it is an exceptionally flexible white that can match up well with lots of fare and should be great with seafood, like a fine Albarino is, as well as being a savvy summer sipper, drink now and for another 3 to 5 years.
($18 Est.) 92 Points, grapelive