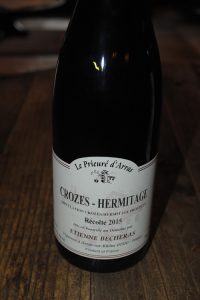 2015 Etienne Becheras, Crozes-Hermitage Rouge “Le Prieure d’Arras” Northern Rhone, France.
Etienne Becheras, a fifth generation vigneron, has a small estate domaine with parcels in both Crozes-Hermitage, where the family lives and in Saint-Joseph, which are all farmed organic and where he has spent the better part of his adult life rebuilding the vineyards and rescuing parcels so his domaine more resembles what it was in his grandfather’s era. I had had his beautiful and soulful Saint-Joseph a few times in the past, but earlier this year I got to meet the man himself at one of his importer’s, Rosenthal Wine Merchant, west coast stops and taste through the extended lineup, all which impressed me further, his 2015’s are absolutely gorgeous, especially this Crozes-Hermitage Rouge Le Prieure d’Arras, from his home grown Syrah vines. Becheras, an ex-Rugby player, is a big guy and you can tell he works hard on his steep slopes, he is a man of the earth and there is no pretense nor illusion of fame or wealth, he will just pursue his own passion and make wines that are traditional and pay homage to his ancestors, his life and that of his wines reflect this terroir. The 2015 Le Prieure d’Arras, 100% Syrah is pure Crozes-Hermitage, slightly rustic and authentic, but with alluring aromas of violets and sweet black fruits leading the way to a medium full palate of boysenberry, blueberry, damson plum and tangy currant fruits along with leather, minty licorice, peppercorns, greek olive, a hint of truffle and lingering kirsch. The ripe tannins make their presence known, though it’s youthful freshness keeps things vibrant and the fruit always things covered, with air this Crozes expands and adds flint and loamy earth as well as bitter lavender adding a nice contrast to the flow of blue and black fruit, this is a wine that you can’t seem to let go of, every sip grabs your attention and seduces with it’s depth, dark garnet/purple hue and natural power of attraction, it’s an amazing wine for the price. Etienne Becheras uses old school methods in the cellar, whole cluster, native yeasts and extended elevage in well seasoned used cask, there is nothing fancy employed, but it all works here and I highly recommend all of his wines, they are terroir driven and will reward cellaring in the short and mid term, drink this one over the next 5 to 7 years.
($28 Est.) 93 Points, grapelive