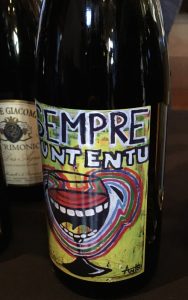 2015 Domaine Giacometti “Sempre Cuntentu” Vin de France Rouge, Corsica, France.
A very cheeky fun red from the wild and remote island of Corsica, the Patrimonio based Domaine Giacometti, a rising star of the region that makes finely crafted old school wines, showing their humorous side with this weirdly labeled (artist label) Sciaccarellu wine. Giacometti produces a tasty set of blended wines that feature Grenache and Niellucciu (Island Sangiovese) as well, but I loved the fresh natural character of this unique 100% Sciaccarellu Sempre Cuntentu Vin de France Rouge that comes from a sandy patch of granite based soils in this rugged isolated region on Corsica’s northside near Bastia. Imported by Kermit Lynch, who has almost single handedly secured the top estates and who has brought the Island more fame than Napoleon! The Domaine Giacometti wines are still solid values and not as widely known as producers like Abbatucci, Leccia, Arena and Clos Canarelli, but that is good news for fans of the island’s wines that are more budget friendly. The 2015 Domaine Giacometti Vin de France “Sempre Cuntentu” Sciaccarellu (an Etruscan import in the long ago past originally from Tuscany where it is known as Mammolo and once featured in Chianti and Vino Nobile though has fallen out of favor and almost never used there.) is native yeast fermented in stainless and aged on it’s lees for 9 months without the use of oak, it shows bright detail and should be served slightly chilled to highlight it’s delicacy and verve in the same way you would with a Beaujolais and other lighter framed reds that are good summer quaffers and perfect for less heavy dishes or seafood. This all organic Sciaccarellu has tangy strawberry, briar laced raspberry and juicy plum fruits with zesty red citrus, mixed floral notes, flinty mineral and spicy elements as well as crisp tart cherry/currant and anise/minty/herbs all wrapped up in a lean almost medium weight wine, that should be enjoyed young. This 2015 has a warm vintage quality about it, but stays brisk and vibrant, though I bet the 2016 will be even better, look for these soulful Giacometti wines, they offer lots of earthy charm.
($20 Est.) 91 Points, grapelive