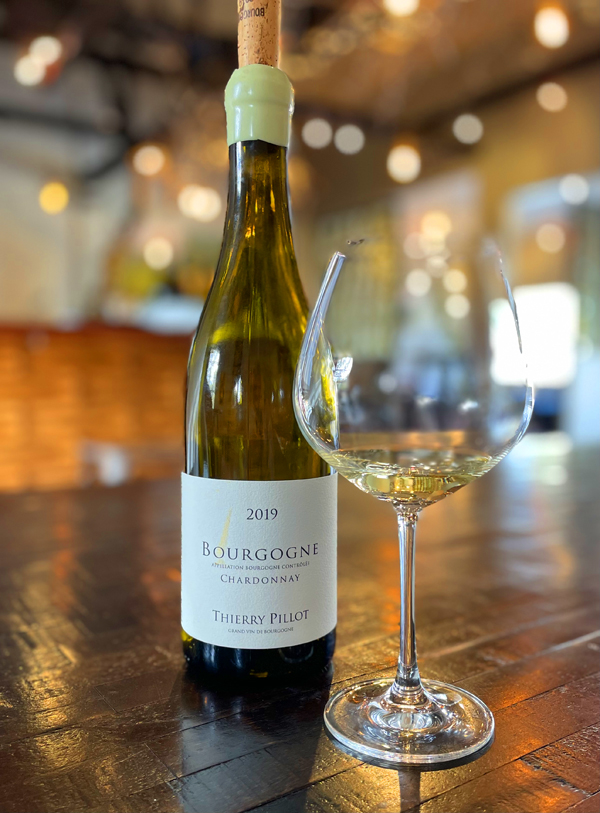 2019 Domaine Thierry Pillot, Bourgogne Blanc AC, White Burgundy, France.
While still of youth, Thierry Pillot is already among the best of the producers based in Chassagne-Montrachet, and is fast becoming as much a cult hero here as Pierre-Yves Colin-Morey, and this stunning Bourgogne Blanc 2019 is as aromatic, riveting and salty delicious as wines way over a hundred dollars, it sings with classic Cote de Beaune hillside intensity, be it Meursault, Puligny or Chassagne, this is brilliant stuff. Domaine Paul Pillot, originally founded by Jean-Baptiste Pillot, a barrel maker, in 1900, and now there’s Domaine Thierry Pillot, too, while the original estate, has also been directed by, since 2004 by the dynamic Thierry Pillot, who’s own label wines are more in the mode of crystalline purity and mineral driven, rather than weighty or oaky with tons of vibrancy and racy in personality. It should be noted that Thierry, who eventually began bottling wines under his own name, and for the time being, the fruit for these wines is sourced from land owned by other farmers, but farmed by Thierry himself to guarantee the grapes are of the highest quality. This excellent, lightly golden, little wine has lovely dimension and a classic array of flavors with citrus blossom, hazelnut and crisp orchard fruits on the nose that lead to a medium bodied palate of tart apple, Bosc pear, quince, peach and fig fruits along with clove spice, wet stones, mouth watering saline, a touch of flint and brioche and clarified creme. This wine comes from Chassagne-Montrachet and Remigny, with vines over 35 years old and saw a lengthy elevage for an entry level Chardonnay with twelve months in barrel, 10% new, then rested another six months in stainless tank before bottling.

Thierry’s dad, Paul took over the Domaine Pillot in 1968, acquiring more prestigious vineyards across Chassagne-Montrachet and Saint-Aubin, similar to his neighbors, like the Colin family and the wines saw a big jump in quality. Today, the domaine owns 13 hectares of vines (4.5 in red) and is run by Thierry, who began working here at the family winery in 1999, before taking over himself as mentioned in 2004. Thierry Pillot is now the 4th generation to take on the reins here and is again as noted above one of Burgundy’s brightest stars, he has put a lot of effort into the vines and has taken a minimalistic approach in the cellar with much less new wood being used here, and the retaining of natural acidity, making for wines of finesse and tension, as this regular bottling, under his Thierry Pillot label, of Bourgogne shows. There’s a lot to love in the way this basic Bourgogne Blanc performs and it is hard to beat to value here and 2019 was not a particularly easy or heralded vintage, so I am really excited to see what Thierry does with his 2020s, a year that is getting a ton of buzz for the whites. It’s been said that Thierry already had a recipe for success, at Domaine Paul Pillot, with the vineyard holdings spread among Chassagne-Montrachet, Volnay, Santenay, and St-Aubin that he inherited from his father, but he’s put the work in here and it really shows in the wines, putting his own stylish stamp on them, and his own label stuff is rightfully in high demand. Oh yeah, it is not only the whites here that demand attention, Thierry does a lot of whole cluster in his Pinots and has an interesting array of plots in Chassagne, Santenay and a prime Volnay Premier Cru from which to choose and I am certainly going to explore those!
($40 Est.) 92 Points, grapelive