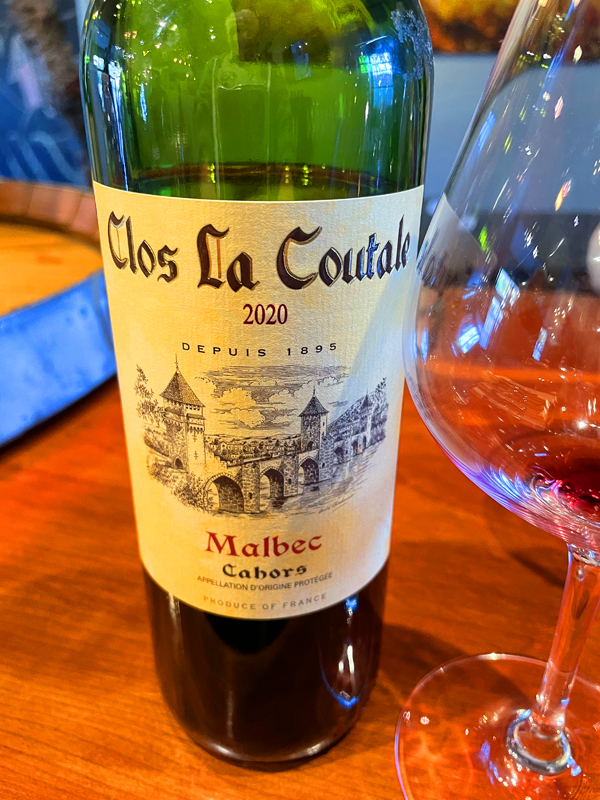 2020 Clos La Coutale, Malbec, Cahors AOC, Southwest, France.
The Clos La Coutale, founded in 1895, is one of the most solid bargains you can find and their 2020 Cahors is a superb Malbec red wine with smooth layers and a light earthy quality with black cherry, plum, currant and mulberry fruits along with hints of dusty spices, roasted coffee, violet laced florals as well as nice mineral tones. With air this vintage gains a rounded medium to full bodied palate and the tannins, while there are ripe and smooth, maybe thanks to an addition of Merlot here. Cahors, an ancient almost forgotten region in France’s almost feral Southwest, is seeing a Renaissance with many amazing new generation winemakers and wines that have taken this historic area to new levels of quality and excitement, with Emmanuel Rybinski’s Clos Troteligotte Malbecs, which have a cult following being some of the most beautiful and exotic in the old world, and Fabien Jouves, who is also making more natural style Cahors wines with his Mas del Perie label is one of the region’s brightest stars, rounding out a place more known for rustic and chewy wines. Clos La Coutale is maybe less polished, but they too have significantly raised the bar here and this wine is a ridiculous value and this latest release, 2020 vintage is one of the best regional, authentic and traditional reds, for the money, you’ll find in France. The dark purple/garnet Clos La Coutale is made from carefully sorted and 100% de-stemmed grapes with a traditional fermentation, in stainless steel vats, lasting just under three weeks and this Cahors saw about a year in used Bordeaux barrels, all to allow terroir nuance to shine through in the wine.

Cahors, a former Roman town, was a center of commerce during the Middle Ages, which is seen as a remote and hard edged country wine region, though as mentioned, actually has highly entertaining and serious (wine) history, the area dates back to Celtic times when it was known as Divona, but really became famous during Roman times, in fact it was one of the most import wine producing treasures of their empire. Cahors supplied the Roman armies with dark and powerful black wines, which legend has it aided in their conquest and was a reward for their many victories! Little known and remembered, is that it was the shipping of these Cahors wines, that made Bordeaux a thriving port and have have been instrumental in giving the locals there the idea of commercial wine production of their own, cutting out the long distance hauling of barrels overland to Bordeaux. Before Argentina’s rise and use of the Malbec grape, Cahors was synonyms with this varietal, which can also be known as Côt, and it is good to be reminded of that and to have wines such as this compelling Clos La Coutale. The Bernède family, owners of the Clos La Coutale, are keepers of tradition, watching over one of the region’s oldest domaines, that was originally established before the French Revolution. Kermit Lynch imports Clos La Coutale, is big fan of Philippe Bernède’s work here and the picturesque setting, along the alluvial terraces of the Lot Valley that are rich in siliceous, clay, and limestone soils. The micro-climate of the vineyards at Clos La Coutale is prime, for the 25 year old Malbec vines, with southwest sun exposure, giving this wine its depth and richness, I highly recommend enjoying them meat stews and casual family meals.
($18 Est.) 91 Points, grapelive