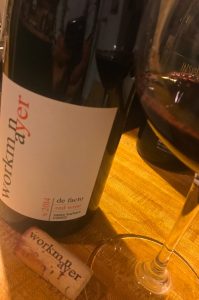 2014 Workman Ayer, Syrah, De Facto Red, Santa Barbara County.
Michel Ayer’s latest set are deeper and more dense than his prior effects and this 2014 De Facto red has gained a bit more seriousness and has a bold palate impact, it’s a blend of 90% Syrah and 10% Grenache from select sites in Santa Barbara County and impresses for it’s rich character and length. Ayer crafted just about 90 cases of this stuff, using a bit of new Radoux French oak on the Syrah lots, he also co-fermented a tiny amount of Viognier in a third of the Syrah blend, while the Grenache was raised in well season wood to capture the fresh and fruity side of things, the vineyards used include parcels found in these areas 37% Ballard Canyon Syrah; 27% Los Alamos Syrah; 26% Santa Rita Hills Syrah & 10% Los Alamos Grenache (Thompson Vineyard). This is a sleek and modern California Syrah, it reminds me of Margerum in style, and it gains a bit of chewy density with air and well as revealing sweet and smoky oak nuances, but overall is very compelling and has attention grabbing textural pleasures with subtle spice and burnt embers adding to the loaded fruit which leans to blackberry, boysenberry, jammy plum, kirsch and blueberry compote as well as cassis, fig cake and gentile anise, minty dark chocolate and peppery lavender. The wood has worked well to smooth out the tannins and hide the acidity, though it still has a nice firm quality and it works well with robust cuisine, it’s purple/garnet opaqueness also lets you know this wine might be best with BBQ and fall weather food choices, it’s a step up from earlier wines in the Workman Ayer line and looks set to be a real crowd pleaser. I enjoyed this with pizza, but I would suggest it with Carne Asada street tacos or Korean BBQ pork/meat dishes!
($42 Est.) 90+ Points, grapelive