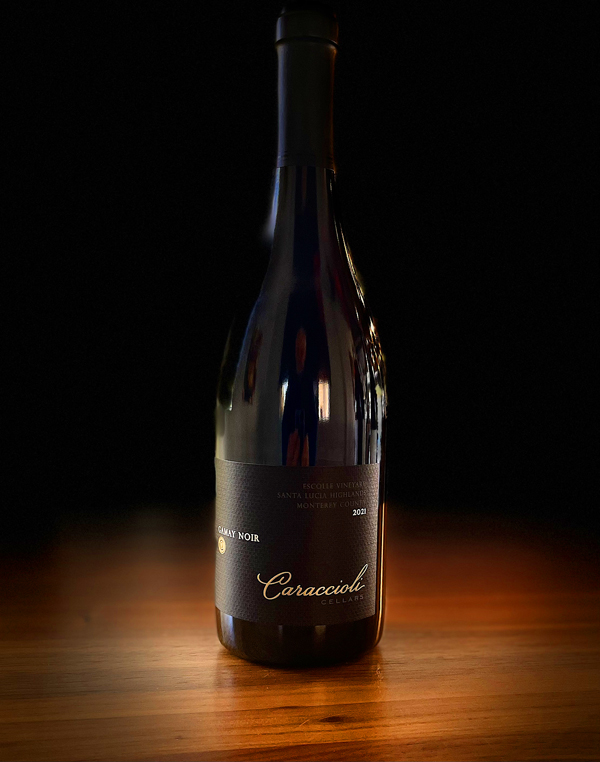 2021 Caraccioli Cellars, Gamay Noir, Escolle Vineyard, Santa Lucia Highlands.
The Caraccioli Gamay is bursting with bright fruit intensity and classic Beaujolais flavors along with the vintage’s zesty acidity, making for a delicious version of this grape with carbonic like creamy smooth tannin and layers of black cherry, strawberry, cranberry and juicy plum fruits. Medium weighted and expressive there is a lot to admire here and this debut release of true Gamay Noir from the Caraccioli’s shows there’s tons of potential in the Santa Lucia Highlands for this varietal. One of three wines to show off Escolle Gamay have been released now, including this tasty wine, along with exciting efforts from Samuel Louis Smith and Ian Brand, both of which I already reviewed here and loved, interestingly each has its own personality, while still highlighting the grape in a pure way. Some of that is thanks to the terroir here, with the highlands having a Granitic Metamorphic Schist underpinning, with Escolle, as the winery notes, being of a soil make up mix including Chualar Sandy Loam – 93%, Alluvial Sandy Loam – 5% and Parkfield Clay – 2%, all of which is wonderfully suited to Gamay, a grape at home in granite based soils. Modern California is thrilled with the Gamay revival and there is a real enthusiast following now that has become almost fanatical for them and I’m sure this one will sell out fast, along with the even more rare Gamay and Pinot, Burgundy inspired, blend that the Caraccioli’s call Passetoutgrain, just as it is known in the Cote d’Or!

The Caraccioli’s planted the Escolle Vineyard in the March of 2008, and as they say, it is 124 acres grounded in the northern Santa Lucia Highlands, where it enjoys a cool climate with plenty of cold air flowing down from the Monterey Bay. Escolle is obviously primarily planted to mainly to Pinot Noir and Chardonnay, with 46 rootstock and clone combinations throughout the vineyard, where the Caraccioli’s sourced their own grapes for both their famous Champagne style sparkling wines, as well as a selection of fine still wine offerings including this one, as a few special block Pinots that are almost impossible to get. The beautiful Escolle Vineyard is sustainably farmed, certified (SIP) and utilizes minimal intervention practices throughout the vineyard, making it a favorite with wineries that purchase fruit from here. No herbicides are used on Escolle, and as the winery notes, all or any weeds are removed manually with either a weed knife or by hand. Because water is always an issue in California only a minimal to no irrigation is utilized here, unless an extreme vintage or event takes place. In 2018 just under three acres of Syrah were grafted to the vineyard, that looks promising, then in 2020 and 2021the Caraccioli’s added four acres of Gamay and an additional two acres of Syrah. Scott Caraccioli, who leads the family’s efforts here, says that as the vineyard continues to mature and realize its full potential, they will experiment accordingly, which has led to this exciting wine’s existence. This Caraccioli Gamay with be a great companion to the Holiday meals ahead and will be a nice quaffer over the next year or so.
($45 Est.) 92 Points, grapelive