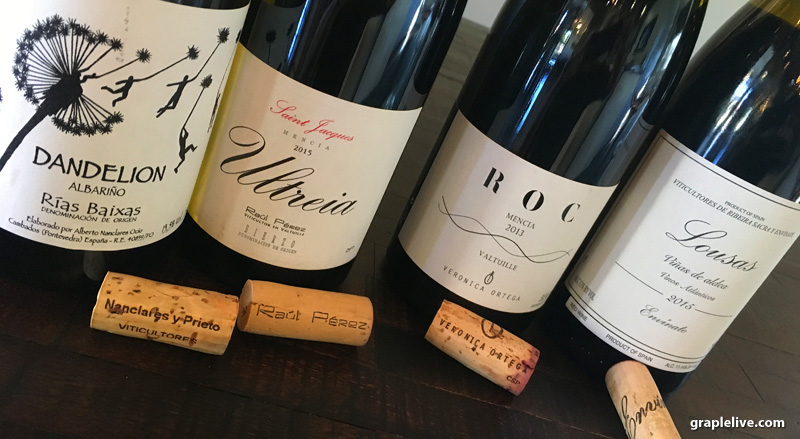 Spain’s Galicia region on the Atlantic coast is a historic wine area that goes back to pre Roman times and while remote and almost forgotten this is a region on the rise and with an amazing array of wines and passionate winemakers. From Bierzo’s legendary winemaker and guru Raul Perez, the godfather of Mencia, to new stars like Nanclares y Prieto, Veronica Ortega and Enivante’s Ribeira Sacra project. Here are a few of their offerings, they are really worth searching out, even though hard to find in some cases in the states, these are wonderful terroir driven wines. 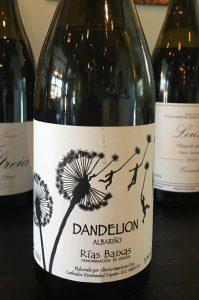 2016 Nanclares y Prieto, Albarino “Dandelion” Rias Baixas, Galicia Spain.
Beautiful pure and almost Kabinett/Feinherb Riesling like (intensity of form) with generous flavors in the mouth this gloriously delightful Albarino from Alberto Nanclares and Silvia Prieto is vivid, saline and textured with bright green apple, tangerine and peachy stone fruit on the crisp palate, with wet stones and light spices, it’s so well balanced you’d think it might be slightly off dry, but with brisk energy giving it a cat like taught muscle like focus! The unpretentious and humble Nanclares is one of Albarino’s great stars from the Cambados area of the Rias Baixas region in the Atlantic influenced Galica, his wines all from organic grapes show a leesy depth, while still being mineral driven and salty, with this Dandelion cuvee coming from 30 to 60 year old vines near Val do Salnés grown on sand and granite soils, right at sea level with locally historic pergola training. The Dandelion is fermented with native yeast, naturally, in stainless steel with no malo and aged a year on the fine lees, it is unfined and unfiltered allowing the complete capture of every nuance and terroir elements, and this 2016 is the best yet, that I’ve tried on this wine, it’s detail and varietal vitality is fantastic, especially for the price. This wine will be killer with crab this holiday season and is an amazing sea food cuisine partner, from oysters to grilled baby octopus as well as mackerel and sardines, it makes my mouth water just thinking about it! Drink it now and often, not easy to find, Silvia and Alberto have a cult following, I got my bottles from Vinopolis Wine Shop in Portland, Oregon, and it’s well worth the search as is their estate bottlings as well as is their super rare Mencia (Ribeiro Sacra) offerings, imported by Jose Pastor Selections, these are not to be missed wines from Galicia.
($22 Est.) 92 Points, grapelive 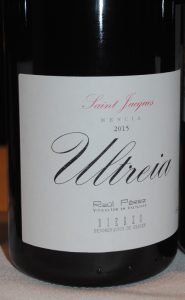 2015 Viticultores de Ribeira Sacra Y Envinate, Lousas, Vinas de Aldea Vinos Atlanticos, Ribeira Sarca, Galicia Spain.
The gang at Envinate has crafted a gorgeous wine here, after allowing for it to blow off it’s slight reductive funk, it turns beautiful with classic peppered violets and damson plum, and it’s vital medium body gives subtle pleasures and life, wow this 2015 is a seductive charmer, especially after plenty of air. Envinate, which means “wines yourself” is four friends that are from vastly different regions of Spain from the remote Canary Islands to Murcia, they are winemakers Roberto Santana, Alfonso Torrente, Laura Ramos, and José Martínez, all regional stars, if not superstars! Roberto Santana almost singlehandedly has made the wines of Tenerife mainstream and world renown with his volcanic and rustic offerings made from mostly mission grapes, especially Listan Prieto, but his partners have had almost the same successes from their areas too, and this 2015 Viticultores de Ribeiro Sacra y Envinate Lousas comes from vines overseen by Alfonso Torrente, and it’s one of the best Envinate I’ve tried! And this is their village level offering! It’s all Mencia (think Syrah meets Burgundy with a touch of Fleurie mixed in!),100% whole cluster, native fermented in bins and then raised in used mid size oak casks without racking, bottled with a tiny amount of SO2, unfined and unfiltered, it’s a beauty with lovely detail and lots of mineral spice. The grapes are hand tended from steep plots, these Sil River valley slopes look like the Rhein or Mosel and the soils are smoky slate and granite, which gives these Mencia wines their likeness to the Northern Rhone, in particular Cornas and St Joseph, as is so in this Envinate Lousas (Slate in Galician) Vina de Aldea, sourced from 60 year old organic vines. The contrast of sweet violets and red pepper and flinty notes really is really seductive and entrancing, I love this stuff, this and Pedro Rodriguez’s Guimaro are two of my favorite Ribeiro Sacra wines, drink over the next 3 to 5 years easy.
($38 Est.) 94 Points, grapelive

2013 Bodega Veronica Ortega, Mencia, ROC, Valtuille, Bierzo, Spain.
The carefully hand harvested ROC by Veronica Ortega is bright and fresh with an almost Dolcetto like bite and feel, but gains with air and becomes a bit more serious with time in the glass, turning into a lovely full flavored Mencia. Veronica, the Cadiz native, who has trained around the world including a stint at Burn Cottage in Central Otago with Ted Lemon and was mentor by the famed/legendary Raul Perez, uses 80-100 year old vines for her signature ROC bottling, with native yeast ferments and 14 months in French (mostly well seasoned) barriques, showcasing her Valtuille terroir in a less overt manner than some Bierzo, crafting a wine that highlights the mixed soils which include clay, sand and slate and at good elevation, which allows vitality and structure. She ferments in cement vats with normal punch downs with a 20 day maceration, with 50% whole cluster from organic grapes, making a wine with traditional character and with aging potential, it’s got a pop rock feel right now, but it looks set to get really rocking good over time! Interesting, Ortega’s ROC continues to remind me of Piedmonte, with a full Barbera like color and Alto Langhe Nebbiolo like feel on the firm/youthful palate! The ROC 2013 starts with earthy blackberry, tart cherry and tangy currents, it’s still primal on entry with a tight slightly closed feel before giving way to sweet raspberry, strawberry and plum fruits along with bitter citrus peel, light herbal notes, mineral tones, balsamic/iodyne and wild spices, finishing with some tannins and delicate wood shadings. Imported by Eric Solomon Selection, Veronica’s wines are not always easy to locate, though are starting to attract more attention, be on the look out for her latest releases!
($35 Est.) 92 Points, grapelive