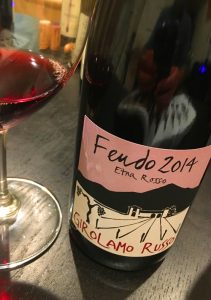 2014 Girolamo Russo, Etna Rosso DOC “Feudo” Sicily, Italy.
The winery, an organic tiny Etna producer, Girolamo Russo is one of Sicily’s newest stars led by Giuseppe Russo, a professionally trained and performing pianist, who since 2005 has been organically farming his family’s old vineyards, some of which are 100 years old, he works 15 hectares of vines on the cooler North side of Etna around the town of Passopisciaro, one of the most famous areas on the volcano. With mostly the Nerello Mascalese grape, the darling of Sicily these days, it’s a varietal that thrives on the volcanic soils, it makes for a fine tannin structured, silky medium bodied wine that leads to comparison with Burgundy (Pinot Noir) with it’s elegance and complexity, though with it’s exotic lava/ash spiciness it has it’s own terroir character that gives a unique appeal and style. All of Giuseppe’s cru wines are crafted the same way, with native/natural yeast, without fining or filtration, or temperature control at fermentation and employing a gentile 10-12 day maceration, with hand punch downs, with each of the small lots kept separate until blending into each of the wines. The Feudo cru is from 60 to 65 year old vines and allows for a 200 case lot, and it’s a field blend of more than 80% Nerello Mascalese with the rest mostly Nerello Cappuccio along with a few other local black grapes aged in oak cask, with this beautiful 2014 is perfectly balanced and satiny in feel, but don’t be fooled by the first impression, it’s supple mouth feel gives way to glorious complexity and depth with air and time in the glass, it’s a long wine that reveals true terroir and passion of place. Giuseppe Russo was keen to learn his craft and go his own route, so was influenced without extreme dogma by a variety of experiences with his neighbors, all great winemakers, including Frank Cornelissen, the intense natural winemaker, Passopisciaro’s Andrea Franchetti, who crafts bigger and more age worthy wines, as well as Marco de Grazia of the modern Tenuta delle Terre Nere, who’s wines were some of the first to gain international fame from Mount Etna, especially in America, his bottling of single vineyard wines and crus was certainly something that Giuseppe found profound and he followed in his own wines. The 2014 Feudo Girolamo Russo Etna Rosso, imported by Oliver McCrum Wines, is richly textured and with layers of red fruits, mineral intensity and vivid spices with a palate of dried flowers, flinty stones, dusty plums, raspberry and with a core of earthy cherry along with subtle red pepper, cedar and anise adding some lavender, chalk, fleshy strawberry/peach and a hint of candied red citrus. Beautifully detailed, clear in form and round this is a wonderful drinker and would easily hold it’s own against some serious wines, and it should age nicely for another 5 to 7 years, it’s a sexy and well made red, impressive for it’s restraint and grace.
($40-55 Est.) 93 Points, grapelive