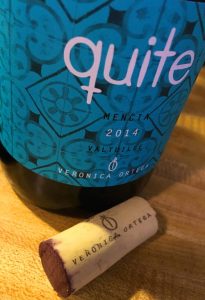 2014 Bodega Veronica Ortega “Quite” Mencia, Valtuille, Bierzo, Spain.
The 2014 Quite Mencia by the talented Veronica Ortega is deeply hued and textured with earthy richness as well as having beautiful delicate floral tones making for a savvy and terroir driven wine. Seeing Ortega’s CV is pretty impressive, she has been mentored by the legendary Raul Perez and her wines seem connected at the hip with his, but the list of places she’s put in time at is also mind-blowing, Veronica has made wine at Burn Cottage in New Zealand with Littorai’s Ted Lemon as well as Domaine de la Romanee-Conti and Comte Armand in Burgundy, Alvaro Palacios and Daphne Glorian in the Priorat, plus Domaine Combier in Crozes-Hermitage and with Niepoort in Oporto! This pedigree while so young is absolutely amazing, especially for a girl from sleepy Cadiz, not far from Spain’s Sherry region, now she is carving out her own niche in Bierzo, settled in Valtuille de Abajo where she farms 80 year old Mencia vines for her own Bodega Veronica Ortega ROC and Quite labels. These organic wines are simply gorgeous offerings, with this 2014 Quite Mencia coming from sandy plots with clay and slate soils, it is different from her top cuvee ROC, because she wanted a more flowery and lighter version that highlighted the nature of some of the individual plots, she uses native yeasts and tank ferments here and ages a short time, about 8 months, in both neutral oak cask as well as big 800L amphorae. This Quite Mencia 2014 is performing wonderfully right now, it has a tiny amount of other native varietals co-fermented in including white grapes Godello, Valenciana and Palomino Fino as well as red Alicante Bouchet and the rare Merenzao, adding to the detail and complexity, it starts with light violets, black olive and flinty mineral along with black currant and faint cinnamon in a medium bodied red that lingers with black cherry, saline, minty licorice, porcini/earthy notes and bramble berry. This is a stylish cuvee that reminds me a little of Foradori’s Teroldego and Andre Perret’s Saint-Joseph, this is really a killer wine, imported by Eric Solomon’s European Cellars, it’s a sleeper and a great value, Veronica Ortega is a winemaker to follow!
($25 Est.) 92 Points, grapelive