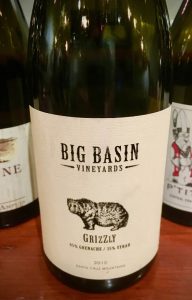 2012 Big Basin Vineyards, Grizzly, Syrah/Grenache, Estate, Santa Cruz Mountains.
Bradley Brown’s Big Basin Vineyards is one of the Santa Cruz Mountains best producers of Rhone style wines and his latest set of wines show why, there make up an awesome lineup of wines, which now also include a top notch selection of Pinot Noirs nd Chardonnays from sourced fruit. Brown’s Rattlesnake Rock Syrah is his top bottling and his signature wine, it is as great as ever, but I was happily surprised by two other bottlings that might otherwise go missed, the Coast View Vineyard Chardonnay, with it’s glorious Puligny-Montrachet like character and class, truly a great Chard and the estate grown Grizzy red, in this case the 2012, made from primarily Grenache, though in this vineyard it had a big dose of Syrah, it’s a stylish effort that I couldn’t help, but be mesmerized by! I have tasted this wine on what I believe now are three occasions, this last time in a blind Rhone tasting, where it really stood out and showed really well, earning high praise from almost all of us industry tasters on a night when some heroic stuff was unleashed. The deeply colored, from the Syrah, Grizzy 2012 is a California wine first and foremost, but still with enough earthy/savory elements as to give the impression of the old world in the glass, especially in a lineup of ripe Chateauneuf du Pape, Gigondas and Vacqueyras, it’s a wonderful and impressive wine that is reaching a good drinking window, and while not a cheap wine, it offers some solid bang for the buck. Brown’s home estate is all certified organic and he uses mostly traditional minimalist winemaking methods in the cellar, employing native yeasts and using partial whole cluster with the wines seeing longer macerations and longer elevage in French oak casks with some barrique and a few large barrels, all done the highlight the site and showcase the purity of these wines. The 2012 Grizzy, made from 65% Alban clone field selection and 35% Syrah Alban clone field selection, grown on a mix of clay loams, ancient mudstone and with a core of sandstone underpinning is at about 1,300 feet of elevation and faces almost directly south, mostly from Big Basin’s Homestead Block a parcel that sits just below the Rattlesnake Rock Vineyard and was planted in 2007. The Grenache focused Grizzly is lifted and more aromatic with the Syrah added and lovely violets and dark floral tones enhance the bouquet while the juicy fruit driven Grenache fills the palate with loads of rich and flavorful fruit giving a sense of density while staying remarkably detailed and focused, it shows a depth of form that is joyous to behold. There is a ray of earth and spice and a hint of nervy stems that adds vigor and intensity to the layers of dark fruit that unfold with blackberry, boysenberry, plum, strawberry and cassis that fill the mouth in a textured attack. Hints of framboise, cedar, minty anise and fresh cracked pepper come through in the background along with a subtle oak note and a faint whiff of truffle/game that keeps things intriguing from start to finish, this s a class act to be admired, drink now and for the next 3 to 5 years.
($55 Est.) 94 Points, grapelive