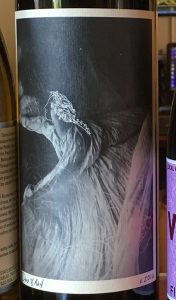 2016 Desparada, Nebbiolo “Dione.8.Nh4” Luna Matta Vineyard, Paso Robles.
The Desparada 2016 Dione Luna Matta Vineyard Nebbiolo was a small lot, just 24 cases, that was fermented in Amphora and is a part of Vailia From’s new experimental Stalwart Series with these terra-cotta vessels. Her cutting edge wines are all intriguing efforts, she is crafting some interesting wines focused on both Bordeaux and Italian varietals, as well as blends using both that are especially successful, much the same way as L’Aventure has been with their Bordeaux meets Rhone style bottlings, highlighting the amazing array of wines that impress here in Paso Robles. After the native yeast ferment in the Amphora, Vailia aged this Dione Nebbiolo in a single 100% neutral French oak, which means it is a rare edition with only 24 cases made and it was only offered to her wine club, though begging worked in her beautiful zen like tasting room and winery in Paso Robles’ Tin City, though joining the Desparada mailing list and or wine club is highly recommended. Richly flavored, ripe and lush with true Nebbiolo markers, though with the added density that the California sun brings, this Desparada Dione Nebbiolo from the Luna Matta Vineyard feels glorious on the palate with layers of racy, but opulent red fruits, light spices, incense, dried flowers and a touch of tannic grip. It opens up nicely and really flows seamlessly with black cherry, raspberry, damson plum fruits leading the way along with anise, lavender oil, chalky stone and a sweet/earthy Chanterelles note in a medium/full bodied wine that stills feels lively even at about 15% natural alcohol with enough acidity to cover the sweet character of the fruit adding a hint of mineral charm with air, this is impressive stuff, best served with robust cuisine and enjoyed slowly with a long meal.
($50 Est.) 93 Points, grapelive